"a very slick and timely production" 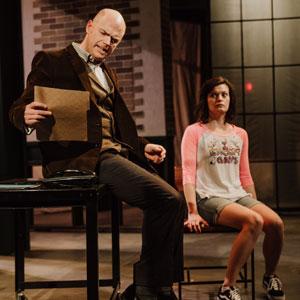 Read the review at John Garcia's The Column

Only a few weeks ago, a very popular YouTuber named Logan Paul uploaded a video he titled "We found a dead body in the Japanese Suicide Forest". He showed an actual dead body of someone who committed suicide and was seen laughing and joking about it. The video went viral, and he was immediately condemned online for his actions. He posted two apology videos but consequently YouTube has cut business ties with him as a content creator and sponsor. Nowadays, the power of social media can change lives quickly and drastically.

Like A Billion Likes is a new play making its world premiere at Stage West Theatre. A simplistic summary of the play is that it's about social media and the quest for popularity and its consequences. The author, Erik Forrest Jackson, won Stage West's 2016 Southwest Playwriting Contest with this piece. Normally the first time a script is fully produced it needs a little tweaking and some edits, but overall this is an impressive script. All the characters are well-rounded, complicated, and engaging. I was particularly enamored by the dialogue. There are three teenage characters and the way they speak to each other seemed incredibly natural and realistic. The dialogue you hear teenagers say on, for example, a show on the CW network is a particular kind of "heightened" language. So I was struck by how the specificity of the language informed these characters and their actions.

Misty Riggs is by all accounts your typical teenager. She goes to school, she has a best friend, she works part time, and she wants to be noticed. She wears a pink T-shirt she made to school one day which says she accepts gays and has unicorns on it. Of course this gets her in trouble with the principal, but she's decided that making a statement for a cause will get her attention. She wants to be noticed in the world, but also by a boy at school she kind of has a crush on. She even starts a YouTube vlog which attracts more hate comments than likes since she isn't really that informed about the issues she claims to support. Delaney Milbourn plays Misty and does an excellent job, especially with the characters' awkwardness. Her mannerisms and voice accurately portray that of a 15 year old girl. Ms. Milbourn shows an impressive range of emotions over the course of the show and earns the weight of the journey her character takes.

Evan Michael Woods, as Jacey Collier, makes an impressive debut at Stage West. Everyone at school assumes Jacey is gay because he is a guy and he wears women's skirts. Jacey explains that at first he thought of himself as "agender", but now he prefers using the term "gender fluid", meaning he does not identify as having a fixed gender. Mr. Woods is effortlessly cool as Jacey. His relaxed, nonchalant nature draws you in. Every specific thing he does for the character makes him endlessly fascinating to watch on stage. I can't wait to see more from Mr. Woods.

Misty's best friend, and really only friend, is Alix Benson. She's kind of an outsider, but she's also a little cool and more confident than Misty. She and Jacey start hanging out frequently which causes conflict with Misty. Alix is also dealing with her father who is off in another country and her mom, Colleen. Alix and Colleen are the only family dynamic we see in the show, but for me the most emotional and touching scenes were between these two characters. Mikaela Krantz, as Alix, is really the glue that holds the show together. She has meaningful scenes with all of the other actors, and does a fantastic job playing the emotional rollercoaster of a teenager who is growing up.

The only two adults in the play are Perry Segars, the principal, and Colleen Benson, Alix's mother and the school guidance counselor. Both are trying to balance their personal lives with their work at the school. They have actually been having an ongoing affair together, but it's no longer working, so they are attempting to break it off. Aaron Roberts, as Perry, reminded me a lot of my principal back when I was in high school. Mr. Roberts found a nice balance between the stern and commanding principal, and the desperate man whose personal life is falling apart. Dana Schultes also did excellent work as Colleen. You could feel her frustration as a wife and mother who has made mistakes.

I really enjoyed the set design by Seancolin Hankins. There are three well-made brick walls that serve as the main backdrop. Each one rotates separately and includes hidden pockets that pull open to reveal props and other set pieces to help define locations. A single bed onstage gets rotated to distinguish between different bedrooms. It's a minimalist design, but it was always clear where each scene was taking place.

Special mention goes to both the sound design and the projections design. Nate Davis crafted very cool animated emoji projections across the brick wall set pieces. During scene changes, the emojis danced and made patterns that were fun and energetic. Also during scene changes, small snippets of pop songs played through the speakers. There were songs from current pop stars like Katy Perry, Demi Lovato, Taylor Swift, and Gwen Stefani with lyrics that echoed some of the scenes happening onstage. I couldn't help thinking I wanted a Spotify playlist of all the songs played during the show. So thank you Ryan Swift Joyner for creating a fun soundtrack.

This is a very slick and timely production, directed by Garret Storms, as it touches on several topics currently in the news. I don't want to elaborate too much as it will give away the joy of discovery of some of these issues. Mr. Storms assembled a top notch cast to tackle these themes and issues. With no intermission, he keeps the play moving swiftly but gives each scene time for the emotional weight it needs. Like A Billion Likes may seem on the surface that it's about social media, but that's exactly the point. We need to dig deeper below the surface to discover how to wield the power of these tools.

Read the review at John Garcia's The Column ​