This season Stage West continues its long relationship with Bass Performance Hall’s prestigious Children’s Education Program. Since 2007, Stage West has annually taken an abridged classic to the Bass Hall stage where thousands of middle and high school students, free of charge, are bused in to engage in the theatrical experience. This season's performance will be virtual. Schools interested in accessing Thurgood Marshall: Civil Rights Champion should reach out to Bass Hall's Children's Education Director Sue Buratto: sburatto [at] basshall.com  or  Sign Up to Access the Video

For well over a decade, Stage West has partnered with the hall to bring a classic work to the stage for 7000-8000 students each year. Previous plays have included R&J: Abridged, Macbeth, and The Crucible. Due to the pandemic, the planned 2021 reprisal of R&J Abridged had to be postponed.

Seeking a new way to reach students, and inspired by social justice protests during 2020, an idea for a filmed production about Thurgood Marshall was born. Alan Buratto, husband to Bass Hall’s Children’s Education Director Sue Buratto, drafted a script which was then brought to Dana Schultes, Executive Producer at Stage West, who took the reins from there.

The script touches on all of Justice Marshall's life, highlighting his work with the NAACP and landmark cases such as Brown vs Board of Education. Broadway actor Major Attaway who grew up in Fort Worth plays the title character alongside area students Preston Brown, Johanna Ivy, Novyn Sek, Niya Talati, Mallory Turner, Zacharias Wormley, MJ Worsely, and Jessica Wu.

Working with PCS Productions, the project was filmed remotely and edited to resemble a zoom call between eight students and Justice Marshall, the program will be shown in classrooms across North Texas. Graphic artist and illustrator Jen Schultes provided illustrations for the piece. 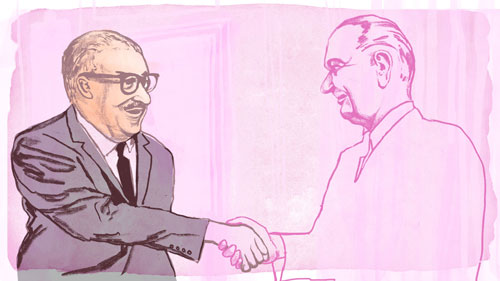 All of us at Stage West are proud to be a part of this program and the connection it forms between the students and classic theatrical tales that pass the test of time due to their timeless exploration of our collective human condition. We thank the Children’s Education Program for its dedication to the arts experiences of youth across North Central Texas.

*All plays were shortened and adapted for this program by Jerry Russell, the founder of Stage West.

This program is made possible by funding from the Children’s Education Program of Bass Hall and is produced by Stage West Theatre.

Read more about the impact of live theater in the lives of children: http://educationnext.org/learning-live-theater