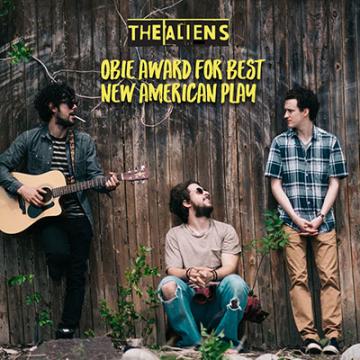 Something about Annie Baker’s The Aliens suggests the spartan, arid, washed-out milieus of pieces like Altman’s Three Women, Bergman’s Persona or Rodrigues’ O Fantasma. Or perhaps the dry, taciturn boys of The Last Picture Show. Baker has fixed upon certain aspects of male culture, the sparse verbal exchanges, the intense demand for respect, the absence of extravagant feeling. The setting (N. Ryan McBride) for The Aliens, behind a restaurant where the waiters take their smoke breaks, feels hopeless and crumby: sand, butt buckets, metal chairs, trash, refuse and detritus. As if a haze of resignation has settled over everything. When Evan (a waiter) meets KJ and Jasper, he finds they’re hanging out because a friend (who no longer works there) has told them its OK. When he asks where to find the Fourth of July party, they just tell him it’s there.

Jasper is perhaps the post 21st Century version of the disaffected rebel poet. If anyone’s the alpha, it’s Jasper. KJ is the easy-going, affable stoner, and Evan the nervous nerd, gobsmacked that he’s found favor with the cool kids. When Jasper addresses him as “Little Man,” he’s not being snotty or dominant, he’s just being matter of fact. Like when men nickname the tall guy “Stretch.” Evan may be jittery and famished for belonging, but he has some sense of purpose. He’s intelligent and teaches at Orchestra Camp, even if the jazzy side of life (girls, catching a buzz, breaking laws) has eluded him. Nothing shakes KJ and Jasper, they have no place to be. Their only recourse to act as if they’re goofing and tossing because everything else bores them. What lifts The Aliens from the hungry squalor that engulfs our three buddies is the ease of mutual male affection. Unspoken and barely acknowledged. A man learns pretty early there are two kinds of guys in the world. The ones who want to be your friend and those who to tear you apart. Or at least piss on you. Whatever their reasons Jasper and KJ have nothing to prove, and have no reason to disparage Evan. So they become his friend.

It may be nearly miraculous that Annie Baker has developed an ear for the way fringe-dwelling teenboys talk, and how they must scratch out an existence in a world that expects men to fall somewhere between troglodyte and rocket scientist. If you feel anything sad, if you’re cerebral or passive, you’re weak. There are times when men wanting to connect might as well be trying to build a bridge to the moon. With toothpicks. And somehow. Somehow. Annie Baker has cut through the aching, pervasive despair of these boys who need to be men, and distilled something startling and radiant from it. The awful pointlessness just keeps piling on, but Baker finds a key as fragile as origami (a guitar, a cigarette, a sparkler) and these lonely souls discover something exquisite. Something remarkable.

With the pitch-perfect, visionary direction of Dana Schultes, Joey Folsom, Parker Gray and Jake Buchanan give us performances that are strong, deeply touching and crisp. Folsom has just the right balance of insouciance and gravitas, Buchanan brings an introspective lightness, and Parker the insecurity and fear of exclusion all guys have felt. This script could have crumbled in the wrong hands, but Schultes and this astonishing cast have taken us deep into the thick of Baker’s Dystopian drama. The Aliens is a valentine for guys with no tools to care for anybody, much less one other, or themselves. But somehow it happens.