Review: "At Stage West, Jeffrey Hatcher's Holmes and Watson proves that the game's a hoot." 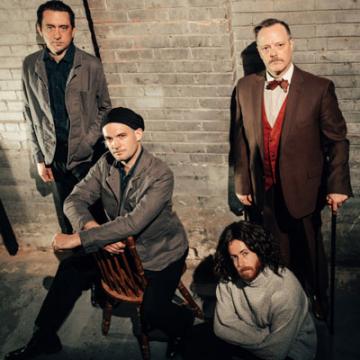 Read the review at TheaterJones.com. Support arts reporting with your clicks!

The Sign of Three: At Stage West, Jeffrey Hatcher's Holmes and Watson proves that the game's a hoot.

Fort Worth — The followers of Sherlock Holmes (though perhaps more buttoned down in style and manner) are cut from the same cloth as Star Trek or Game of Thrones groupies—always on the alert, ready and waiting for another story about the characters they live to love.

Stage West’s engaging production of Jeffrey Hatcher’s 2017 Holmes and Watson isn’t just for true believers, though they’ll surely be happy to have another chance to hang with their heroes. Prolific playwright (and Holmes fan) Hatcher, also known for screenplays that include the Ian McKellen film Mr. Holmes, Stage Beauty, Casanova, and The Duchess, has written a crafty, clue-alicious mystery that ought to please anyone, with a plot that doesn’t just twist—it corkscrews.

In a 40th season that’s seen several edgy, newer plays, Holmes and Watson must have struck Stage West as a just-plain-fun change of pace, a ripping yarn of the old school that offers one well-loved character (Watson) an outside chance to rescue another (Holmes) and set the world to rights…again.

Nearly three years after the great British detective’s presumed death at the Reichenbach Falls—locked in the arms of his nemesis Moriarty—Holmes’ friend and chronicler Dr. John Watson (Mark Shum) is still grieving. Watson can’t let Holmes go: every month, it seems, he’s off to look into (and squash) another fake “sighting” of his friend around the country.

And now comes another plea, this one from a mental asylum on a lonely island off the Scottish coast. The doctor in charge reports having not one but three Sherlock Holmes(es) in his care—or rather, inmates who claim to be him. Can Watson help sort it out—and is there a chance one of these mysterious men might be the true Holmes?

Shum and Wood (as the two doctors) make a fine pair, each of them smart and more than a little touchy about ceding ground to the other. The three “I’m Holmes” actors create distinct characters, each with a different version of what happened at the Falls. As Holmes No. 1, Richard Stubblefield looks and sounds the part with his pale skin, slicked dark hair, and utterly self-confident pronouncements. Holmes No. 2 is played by Robby Gemaehlich as a hot mess of tangled, face-covering hair and jittery speech—but he manages to sound surprisingly keen-witted, even funny. Holmes No. 3 (Steve Robert Pounds) is the puzzler; seemingly deaf, mute and blind, he was found wearing a sign that claimed he was Holmes. Necessarily, Pounds broods silently—but there may be events on the horizon.

What’s a Watson to do? Has he recognized one of them as Holmes, or are all three imposters? He and Dr. Evans engage in a can’t-tell-you game, all cards held close to their Victorian vests…and we’re left wondering. Adding to the cat-and-mouse feel is the open and urgent question of whether Watson’s pistol (confiscated early on by Dr. Evans) is really the only gun on the island. Go ahead and guess.

Hatcher’s script is a nice mix of laughter and tension. The play’s set-up phase goes on a bit—we’re drenched in exposition, back story and detail to the point of audience laughter. And it’s unclear whether Hatcher intends Holmes and Watson to be played with just a touch—or a slather—of ham-it-up Edwardian style. Director Susan Sargeant (the WingSpan Theatre Company’s founder and artistic director, making her debut at Stage West) finds a workable middle ground, leaving room for just enough scenery-chewing and striking of poses to get the audience chuckling—without adding too much high camp to the proceedings. And after an exposition-heavy Act One, Act Two’s fast pace and constant revelations don’t give the audience a moment to blink.

“I am lost without my Boswell,” Holmes once said to Watson, in a reference to English writer Samuel Johnson’s sidekick James Boswell, who spent obsessive decades taking notes about Johnson’s doings for a Life he published in 1791. In the century and more since Sir Arthur Conan Doyle gave up the pen, his fictional Sherlock Holmes has continued to draw Boswells from around the world: novelists, fan-fic devotees, playwrights and screenwriters eager to take up where Conan Doyle left off.

Jeffrey Hatcher is one of those Baker Street irregulars—and Holmes and Watson a lively new installment to the never-ending saga of Sherlock and Doctor John.