The American Conversation—it goes on, and on. 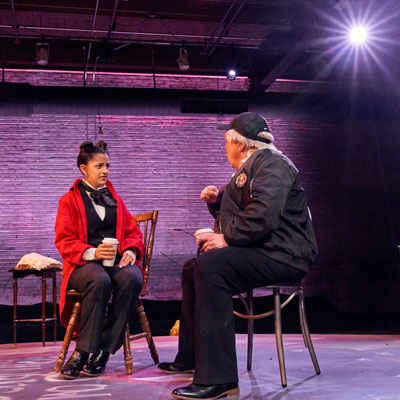 It can be a bore, or a quick way to get thrown out of Thanksgiving dinner. But through the centuries, from Plymouth Rock to Rock the Vote, it’s amazing how many of the arguments, and how much of the passion, circles around the same damned questions.

Leastaways, that’s what I take away from Stage West’s electric and enlightening production of Aaron Posner’s JQA, a highly irregular romp through the life of John Quincy Adams. He was, of course, the son of our second president John Adams. But in a career that lasted from the Founders’ era to the run-up toward our Civil War, he was a notable fly-in-chief on the wall of American history—as a diplomat, ambassador, senator, secretary of state, president, and long-serving congressman from Massachusetts.

Posner relates his life in a highly speculative (aka semi-fictional) string of meet-ups between JQA and other historic Americans. A diverse and clever cast of four (J.R. Bradford, Shyama Nithiananda, Randy Pearlman, Nancy Sherrard) finds fresh life in the issues and questions that still bedevil us. Like us, they struggle with the answers. Is there one “right” kind of government? When do we want its help—and when not? Who gets the biggest say, the many or the few? Is it better to persuade people, or to frighten them? Who is a Real American—and who gets to judge?

Director Emily Scott Banks keeps the action moving lightly around the stage (the audience is seated on four sides in the intimate new “Evie” theater) and helps find the emotional truths in these talky conversations. Some of the political wrangling is almost too timely to bear, though Posner wisely weaves plenty of comedy through the heavier material.

In short, it’s a history lesson, but told with enough heart and hope to keep us engaged. And to our delight, everyone gets to play president in JQA—how democratic is that? Scarlet jackets (Aaron Patrick DeClerk’s fine work) are draped around Ian Loveall’s fragments-of-history set, to be donned and doffed as each actor takes a turn in the central role.

JQA’s father John Adams makes it clear to his eldest (Randy Pearlman matches wits with the whip-smart child, played wide-eyed by Shyama Nithiananda) that “governance” isn’t an abstract, but a nitty-gritty life-changer. The young adult JQA faces a startling “just do it” offer from President Washington (Nancy Sherrard is a genial, knee-slapping George, but you wouldn’t tell him “no”), and later clashes with wife Louisa over his flinty parenting style. President J.Q. Adams rails against Southern “obstructionism” with Henry Clay (Pearlman is deliciously cynical), whose laughter at the odds of uniting our “fractious, fractious” America sounds tragically familiar.

The young diplomat has a few fraught moments with mother Abigail, never a cuddly parental unit, and an older JQA struggles in a tough session with Frederick Douglass (a controlled but fiery J.R. Bradford), who is none too polite about white abolitionists: their lack of urgency on slavery drives him wild. “I am doing what I can,” says JQA. “Do more,” says Douglass. And a late-life overlap with a young congressman from Illinois (“You’re very tall,” says JQA) provides a warm coda to the proceedings, and some marching orders for us.

On opening night of the company’s 43rd season (!), there were some problems trying to “play fair” with an audience arranged on all sides of the action. With practice, blocking and audibility issues will certainly improve. Ryan Swift Joyner’s choices in both sound and music added flair and ambience.

Stage West “repeating” playwright Posner (Stupid F***ing Bird, Life Sucks) may be preaching to the choir with JQA. (Liberals cluster in theaters, right?) But after what feels like a true Dark Night of the Marquee, it’s as satisfying as all get-out to sit down with some (masked) strangers to moan, groan, laugh, and mutter about the never-ending puzzle and pain of our American politics, past, present, and….Welcome back, y’all.