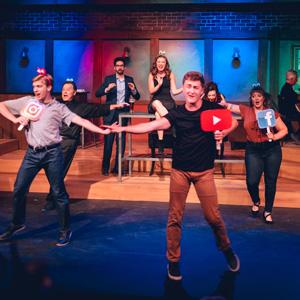 There are times when theatre provides a therapeutic release from the stresses of life. On Saturday, when my wife, Alice, and I attended Stage West Theatre’s wonderful production of the 2012 musical “First Date”, we were fretting over bills, mourning the death of one cat and anticipating the future demise of another. We were ready to be transported outside of our worries for a while. Watching Aaron (Seth Womack) and Casey (Amber Marie Flores) navigate the pitfalls of a first date proved to be the perfect medicine for our blues

In this production, director Harry Parker has given us a tightly paced, highly enjoyable show which touches the funny bone and the heart in equal measure. The premise is simple-Aaron and Casey meet in a bar/restaurant for a blind date. In the two hours we get to spend with them, they wrestle with their past relationships, family, religion, the ‘F’ word (friend), their own expectations for a relationship, and who will pay for the dreaded check at the end of the evening. With a talented ensemble (Lance Jewett, Collins Rush, Randy Pearlman, Bret Warner, and Mary Burchill) providing Aaron and Casey with the people of their past and present and with punchy, witty, and touching songs that are wonderfully catchy, we are taken along on a delightful and memorable journey.

Set designer Michelle Harvey provides a stylized cityscape as the audience enters the theater. As the show starts, this slides away to reveal the restaurant where most of the action takes place. It has a very lived-in, authentic feel to it and provides ample room to the many production numbers. I also enjoyed the way the orchestra, under the direction of Alan Shorter, was included onstage as a house band. The lighting designed by Amanda West compliments the set and believably takes us from reality to fantasy with style and ease.

The costumes by Aaron Patrick DeClerk are fun. Aaron’s nervousness and unease are displayed by his suit while Casey is given the outfit of arty iconoclast. The ensemble moves quickly from character to character with simple items like sweaters and scarves that help maintain the rapid pace of the show.

As mentioned above, the songs are great. They vividly portray the awkwardness and fear of meeting a stranger as well as the longing for something real and lasting. And there is a lot of humor. Whether struggling with first impressions, or receiving a bailout message from a friend, or facing the eternal specter of social media, the songs make us roar with laughter as we recognize the situations that each of us has faced at one time or another. But when it’s time to face real emotion, the songs deliver big time with numbers like “Safer” and “In Love with You”.

Director Harry Parker has assembled a stellar cast. Amber Marie Flores (who I had the honor of seeing at Stage West Theatre last year in “A Doll’s House, Part 2”) is a wonderful Casey. Fond of bad boys and fearful of opening her heart, Ms. Flores has the characters defenses in full display in the beginning of the show and it is delightful watching her retract then redeploy them as the date progresses. She sings so well and her rendering of the song “Safer” was among my favorites of the night.

With a powerful singing voice that can convey indecision and anxiety one moment and then the fierce desire for love the next, Seth Womack makes a grand Aaron. Mr. Womack makes Aaron very likable and he reminded me of myself when I was younger, minus his singing. He makes palpable the longing for something that is lasting, a longing felt by all looking for affection and security.

The ensemble members get to go far and wide with their character portrayals and they are so talented and so much fun to watch. Lance Jewett gives us Aaron’s best friend who gives advice on how to score, and, among his many other roles, plays one of Casey’s ex-boyfriends. Mr. Jewett attacks each role with energy and precision. As Casey’s gay friend providing her bailout calls and as a British Artist, Collins Rush totally kills it. He is hilarious.

Brett Warner is so much fun as Aaron’s Jewish grandmother and mother and as Casey’s sister Lauren. She sings so well, and her comic timing is spot on. Among the many parts Mary Burchill plays through the course, one of the most memorable is Aaron’s ex-girlfriend Allison. With the perfect pose, Ms. Burchill’s Allison is the icon of all exes. Her performance is remarkable.

Special notice must be made of Randy Pearlman’s performance. He is so versatile. His waiter is affable and helpful with just a touch of wishing for something more. He gives us Casey’s father, portrayed as a Catholic Father (priest) and makes him scary in a funny way. His singing voice is sharp, and he nearly brought the house down with the number “I’d Order Love”. Thank you, Mr. Pearlman. You are so much fun to watch.

So, dear reader, I have a proposition for you. I know this really cute musical. It has a great personality, it’s being presented by Stage West Theatre, and it is one of the best shows of the year. So why don’t you and “First Date” get together some night and, maybe, something special will happen. And it won’t be a blind date. I just introduced you. So, take the plunge.