Review: "ADA AND THE ENGINE" 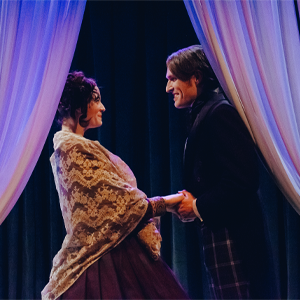 ADA AND THE ENGINE at Stage West​

A young woman with a scandalous family history, a brilliant mind, and intriguing relationships with men- who knew that the subject of such a thrilling story could be a 19th century mathematician! Ada and the Engine is a show about the beguiling Ada Byron Lovelace- an ingenious and ambitious young woman, whose sordid family history places her at the mercy of a harsh society that demands her to "marry well" as a penance for her father's sins. Ada and the Engine comes alive at Stage West with a superb cast, fast-paced action and dialogue, and inspired storytelling that can actually turn the average theater-goer into a math enthusiast.

Kelsey Milbourn was nothing short of scintillating in the role of Ada. Her energy was unmatched, and her enthusiasm for her work was as contagious as her distaste for societal convention. This actress has a gift for drawing in the viewer- she entices you to lean in a little closer, as to not miss a single syllable. Milbourn's portrayal of Ada progressed beautifully and gracefully throughout the performance- beginning as a headstrong teenager, and acquiescing to the role of dutiful wife, she never lost her spunk or spark of passion throughout the play. As Ada's health declines towards the end of the show, Milbourn excels at capturing her character's heart-rending decline.

Severe and haunting, Megan Haratine portrayed Ada's mother, Annabella Byron. Driven to protect her daughter from her wayward father, his reputation, and the perpetual condemnation of society, Annabella is a force to be reckoned with. Haratine's display of intensity was chilling. The character's bitter resentment of her late husband led her to become a cold disciplinarian, and never was she moved to show some display of motherly tenderness for her daughter. Haratine's thoughtful and precise diction, confidence, and rigid posture created a giant of a character, despite her diminutive stature.

Lighting up the room with his easy smile and perspicacity, Steven Pounders flourished in the role of Charles Babbage. Pounders was the very image of the kindly, yet eccentric, academic- at times fatherly, at times full of youthful glee. His interactions with Ada- verbal and physical- could not have been spot-on. From the way he excitedly delved into mathematical theory, to the way he fiercely hugged Ada as she revealed her illness- it was all raw and pure. The chemistry between Milbourn and Pounders was electric, a testament to the skill of these fantastic actors.

Garret Storms played the role of Ada's doting and yet uptight husband, Lord Lovelace. His performance was the picture of restrained forbearance. Smitten with Ada and yet rightfully ambivalent about her relationship with Babbage, Storms showed great skill in navigating the fine line of giving his wife the benefit of the doubt and demanding stricter behavior of her when he was suspicious of her behavior. Through his character he showed the audience he was Ada's intellectual inferior, allowing the viewers to root for Babbage all the more. In the final scene, Storms also portrays Ada's father, Lord Byron- a flirtatious and mysterious character, a 180 degree change from Lovelace. It was a truly fun to watch one actor show off his many talents in one show.

The costumes for Ada and the Engine were delightful. Ada's purple frock and hoop skirt were flattering and eye-catching, and made this bold character all the more fabulous. Babbage's brown suit, vest, and Victorian coat were well-tailored and gave him the look of a mature, dapper scholar. Lovelace's suit was fitting for that of a young aristocrat, and Annabella's high-necked, baby blue getup was perfect for this severe character- though perhaps the choice of baby blue was too cheerful for this intense woman The hairstyles of the women were intricate, tasteful, and appropriate for the time period. Finally, Lord Byron's elaborate turban in the final scene was a regal red and gold ensemble, giving this storied character a truly magnificent presence.

My only true critique of this show probably has to do more with the script than the execution. Though this piece tells a powerful and heart-rending story, I found the final scene where Ada has a reconciliation with her father to contrast too sharply with the mood of the rest of the show. This last scene was ephemeral and imaginative- though interesting, I don't think it gave the play as strong an ending as it might have had otherwise. Nevertheless, the cast and director Emily Scott Banks did a superb job with what they were given. The lighting in this scene was particularly mesmerizing, and the sounds used to create Ada's music had a gentle and calming lull to them.

Ada and the Engine is a work of art that can actually inspire young women to pursue fields of math and science, or even to forge ahead on other bold ventures. By telling the story a young woman who is not only brilliant, but vivacious, confident, and daring, they are showing a woman that is relatable, and a role model whose footsteps beg to be followed. Though Ada's level of enthusiasm to get married and have children is not known, she did not allow these roles and duties to slow her down in her ambition or her success- an encouraging example for those who wish to have robust family, academic, and career-driven lives.

Paint in a Box: Painting for One 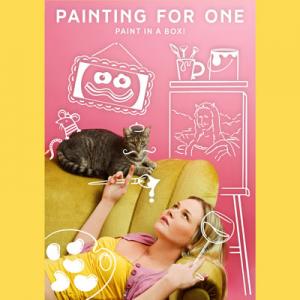