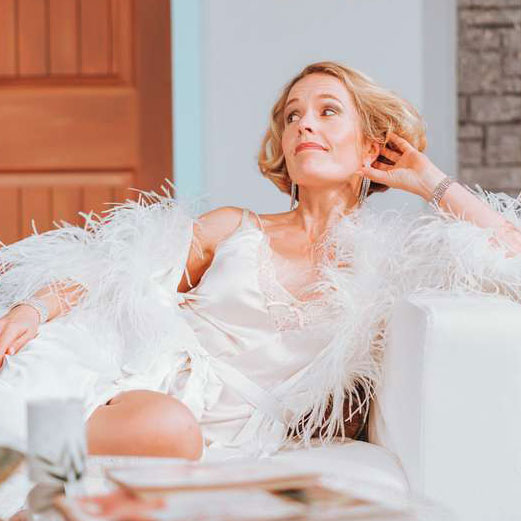 We had the good fortune of connecting with Dana Schultes and we’ve shared our conversation below.

Hi Dana, is there something you can share with us that those outside of the industry might not be aware of?
One thing about the theatre industry that outsiders probably aren’t aware of is how much it costs to put together a professional play. At Stage West’s level, which might be considered mid-sized, your average production costs are between $35,000-$75,000. I wish more people knew that so that when they saw an average ticket price of between $35-$45, they would understand why. Frankly, those ticket prices are also subsidized by a lot of grants, too. At Stage West, and really at most non-profit theatres like Stage West, we work really hard to ensure that there is a wide range of ticket prices from Pay What You Can to the top price. That top price is emblematic of the cost of the production itself.

Can you open up a bit about your work and career? We’re big fans and we’d love for our community to learn more about your work.
My path to becoming an Executive Producer required 20 miles and an extended backpacking trip around Europe. My goal has always been to feel like I’m making a positive impact on the lives of others around me through what I know how to do best: live theatre. The industry has received most of my energy since I was in grade school. I never had big dreams of Yale, NYC, and LA. Instead, I wanted a home where I could make immediate waves and excitement. Finding Stage West was luck. The founder of the theatre was an adjunct at my ala mater, Texas Wesleyan University. I saw a few shows there as a sophomore. I realized that exceptional caliber live theatre was happening right in my “backyard.” I began to inquire how I could be helpful to the team. Fast-forward a few years and the company hired me on as development director. Truth be told, I didn’t have fundraising skills, per se. What I had was dedication, belief in the company, and a hard work ethic. Over the next decade, the company relocated to its original home in Fort Worth’s Near Southside and became a major catalyst for growth for more businesses to the area. Funky, interesting businesses. We built the company up and people came. In 2013, I was promoted to Co-Producer and in 2016 I became the Executive Producer. I look back and ask, “how have I been at the same company for over 15 years now?!” I guess the answer is luck. The trick to working in Fort Worth in this period of the city’s history is realizing that you are there to do the work to progress the city. It would be easy to move to any major artistic hub in the country and pay dearly for every thing once there. In Fort Worth, it’s still affordable and accessible and humming with energy. Right now there are tens of thousands of 20/30/40-somethings like me who are making progressive waves. It’s exciting to know that we are building tomorrow. My part is through Stage West. Getting to be a little subversive while also giving a nod to escapism entertainment is my vibe. I love it. I love Stage West’s patrons (ie, anyone who walks in the doors looking for a place To Be). I love my co-workers. I love the artists that call North Texas home. Challenges have been plenty though. The urge to move away for an easy and expensive dive into a blue-state super-progressive land is present. But I think I’m called to create that land here. It’s already happening. Getting people to buy in is sometimes hard though. This city is all about bars and restaurants. Attracting more varied businesses is so important. I definitely will continue to exercise my vote to elect people to office who have a progressive view of our city. Our leaders need to represent everyone in this city. Everyone. It takes patience to get there though. I guess you could say I am the tortoise in the race. That’s ok. Tortoises are cool.

Let’s say your best friend was visiting the area and you wanted to show them the best time ever. Where would you take them? Give us a little itinerary – say it was a week long trip, where would you eat, drink, visit, hang out, etc.
It would be such a pleasure to have the week off to take a friend around the city. Fort Worth is definitely worthy of both vacation and staycation. Here’s my itinerary: Day 1: Breakfast at Paris Coffee House. This is a Fort Worth staple and everyone who is anyone eventually comes through there and enjoys one of their home cooking style meals. Afterwards, a stroll down Magnolia would be the initial introduction to what I like to think of as the genesis of Independent Fort Worth. We’d hit Ephemera, a cool shop selling trinkets and comics, and then take a class at SiNiCa, Fort Worth’s glass blowing artist hub. That would lead us to lunch – definitely at Fixture. Ben Meritt is one of my favorite local chefs. We’ll visit another of his restaurants later in the week. Our afternoon will be relaxed and spent at the Water Gardens. I’d suggest bringing a book and/or an artist pad and ink to kick back and create. Dinner would be at Black Cat Pizza where a single slice or whole pie is available and both delicious. Day 2: The museum district is worth a whole day. Each of the three main museums, the Modern, the Kimball, and the Amon G. Carter, are each worth a visit. I recommend hitting them in that order and having a coffee or espresso at the Modern and the Kimball, respectively, before moving onto the next sight. That’s a whole day that will wind up with dinner at Lucille’s Bistro which is just a hop up the street from the museums. I recommend the chicken fried steak or the salmon salad. Both are amazing. Day 3: Let’s knock out Northside. There’s a ton of history in that part of town and it is worth wondering through the stockyards and driving through the area to get a look at some colorful and unique parts of the city. Perhaps a splurge on steak would be in order for the evening. I’d recommend Del Frisco but with a caveat: get the steak. Don’t assume that they do anything else great. It’s all about the steak. Day 4: Now we are in a groove. This day starts with breakfast at La Rueda in eastside and is followed by a walk around the Texas Weslyan campus with a stop at Black Coffee for a kick of caffeine. Return to this area for lunch at Ben’s Triple B for the best burger in town. Hands down. (Ala Ben Meritt of Fixture). That evening we’ll take in a show at Amphibian Stage Productions and follow it with a beer at Hop Fusion. Day 5: For sure a movie at The Grand Berry is essential. Any extra time should be spent on Main Street, Near Southside and maybe the Zoo. These will take up most of the day and can leave one pretty exhausted. A meal will be had at Chadra Mezza and another at Vallarta Restaurante. Coffee will come from Avoca. Day 6: This is the final day of the trip and it will start in the Clearfork Village. Shopping, galore, with must stop food at Fixe and/or Rise. Save room for dinner at Stage West’s Lobby Cafe which will be followed by a show. This community hot spot of connection and conversation is a must, and one of the highlights of Fort Worth.

Shoutout is all about shouting out others who you feel deserve additional recognition and exposure. Who would you like to shoutout?
I’d like to recognize my parents, Joseph and Karen Schultes, without whom I may not have been encouraged to pursue being a theatre-maker – something that has drawn me in and given me joy since I was a Pre-K kid. Certainly, They worked hard to provide me and my siblings with every last thing we could ask for and have unconditionally supported all of us as we continue to make our way in the world.