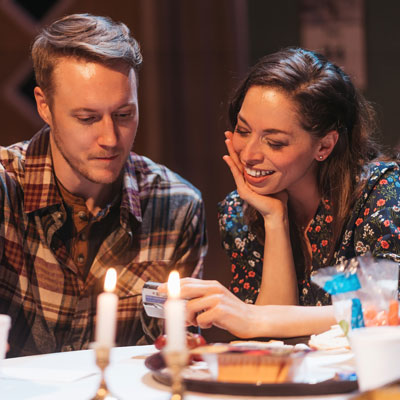 Review at OnstageNTX.com by Jan Farrington

Not to oversell it: Jason Odell Williams’ 2011 play isn’t meant to be Shakespeare (or even Dickens). But there’s more to it than the term “rom-com” can cover. A fine cast of four, directed by New York-based Illana Stein (who directed and co-wrote Amphibian Stage’s compelling Hans & Sophie), create vivid characters who catch at our hearts, make us laugh, and get us hoping for them all—even the annoying screw-up.

It’s going to be tricky to talk about the play without spoiling its twists and turns. This is small-town Virginia on Christmas Eve. A delivery guy has lost a package, and is trying to explain that to the young woman who’s expecting it. Terry (Aaron Kozak) is a total yahoo in a loud yellow uniform; Ayelet (Mor Cohen) is a visitor from Israel. She can’t speak English; he can’t speak “Jewish.” He puts in an emergency call to Josh (Blake McNamara), a childhood friend who might be able to translate.

Josh explains that cramming for a bar mitzvah isn’t the same thing as speaking fluent Israeli Hebrew. But he manages to communicate enough to make Ayelet lose it; she goes for Terry, whacking him with her Hebrew-to-English translation guide.

We don’t need a translation—either for Ayelet’s angry Hebrew or for the look in her eyes when she sees Josh. He looks back. It’s a Moment that gives the story a shove onto another path, or maybe the one that’s been meant all along.

Suddenly, what’s been very real takes on a slight sheen of magic—and we find ourselves on the day before Christmas Eve, as Ayelet arrives with her grandmother Edna (Lisa Fairchild), the one who set this odd adventure in motion. They’re seeing the “true America” by visiting small non-tourist towns, Edna says. She wants to boost her granddaughter’s mood, give her a change of scenery. The motel window has a lovely view of the nearby Food Lion, and It’s a Wonderful Life or “Wheel of Fortune” (Grandma’s favorite) is always on the TV.

Stein draws fine work from the small cast. Kozak plays Terry as a gimme-cap slacker who jumps from job to job. Yet there’s a hint of something more: Terry wants his life to feel “useful.” Fairchild as Edna is a loving mix of warm hugs and practical advice (wanted or not). She knows Ayelet is still grieving a bad breakup in Jerusalem, and (having read Ayelet’s journal “only a little bit”) that she’s having strange dreams. When they’re alone onstage, the two speak “Hebrew” that we hear as slightly accented English, and that fills in story gaps from other scenes where the language barrier is causing confusion.

Cohen is strikingly alive as Ayelet, eyes flashing as she tries to understand and cope with her difficult situation. McNamara’s Josh has a natural strength and calm—but he’s been thrown sideways by his sudden feelings of connection and worry. He’d really like to help this young woman he barely knows. Good thing they both have a sense of humor: it’s a start.

The simple motel-room set by Clare Floyd DeVries is spot-on—the audience (sitting at the same floor level as the studio theater stage) feels they could walk right in from a connecting room. Jared Land’s lighting is a simple way to change scenes, but also provides Christmas-Eve twilight for a lovely fall of snow. And Laurie Land’s costumes are, yes, exactly what these characters would wear.

The best kind of romance is one that includes both the sadness and joys of living a human life, that keeps the audience hoping for a happy ending—but worried that something (doesn’t it always?) will go wrong. It’s a play structure that takes a smart, imaginative writer to set things in motion, and an open-hearted director and cast to pull it off.

Handle With Care leaves a warm glow even after the stage lights disappear; you’ll be feeling it as you walk out the door. In fact, I’m already in the mood to come back and see it again…maybe for New Year’s. Happy Holidays! 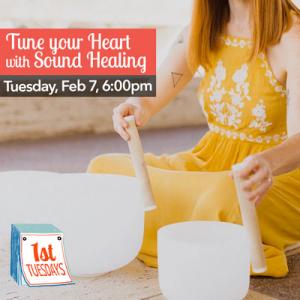 Tune your Heart with Sound Healing