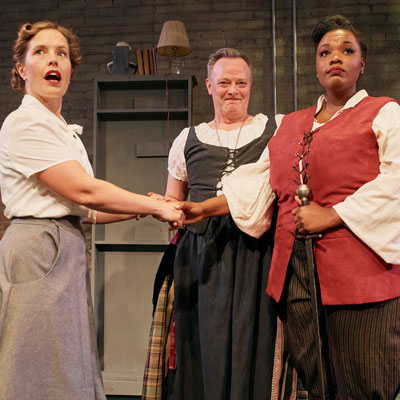 Into the Breeches! Review at OnstageNTX.com by Jan Farrington

"Go home and roll some bandages.” That’s the advice given to the women of the fictional Oberon Playhouse when they want to put on Shakespeare’s Henry V—even though the men who usually act in the shows have gone off to war.

Dubya Dubya Two, as Archie Bunker used to say. The Big One.

Stage West has put together a terrific cast for this regional premiere of George Brant’s play. He made a splash before the pandemic with Grounded, a play about the toll of long-distance warfare, experienced through the eyes of an American officer (a wife and mother) who lives in Las Vegas, near her “job”—controlling drones that strike targets, and people, on the other side of the world.

Into the Breeches! is a gentler play, but with plenty of comedy, edges that catch us off guard, and some fine bits of Shakespeare. Plus, Brant makes room to “localize” the script, allowing for shout outs to the past of each city that puts on the play. We’re back in 1942, and it’s fun (and a bit sad) to hear mentions of the long-lost Fort Worth Press and Dallas Times-Herald. Colonial’s golf course makes an appearance, one of the girls has a beau on “the North Side” of town (you know, up by Billy Bob’s)—and the thought of casting a Black woman in their play…well, it just isn’t done. Until….

Performed in the “Evie,” Stage West’s generously sized black box theater (and with audience seated on three sides of the action), director Joanne Zipay keeps the actors moving—so much so that when they stop to make a speech or plead their case, it gets our attention. Even scene changes (lots of them) turn into ‘40s-style dance bits for some of the characters moving the chairs and tables. Laurie Land’s costumes are atmospheric and detailed, from ‘40s print dresses to Eisenhower-jacket uniforms and full-on Shakespeare puffy shirts and “breeches” (an old word for pants; “britches” is a variation).

Where to begin. This cast starts off well, and just gets better. Dana Schultes is Maggie, whose husband normally runs the playhouse; she’s nervous but brave, and dogs the heels of the businessman Ellsworth (Bradley Campbell is old-Texas funny) who funds the theater. Will he let the ladies “into the breeches”? Maggie has a carrot to dangle.

She and stage manager Stuart (a wonderful Mark Shum) have two people signed up for a Shakespeare cast of…33. Enter bouncy June (Amber Rossi) on a bike, and Grace (Laura Lyman Payne), both eager to be “new blood” at the Oberon. Grace knows her husband wouldn’t like her to act—but since he’s “over there” and “I’m over here,” she’ll give it a go—with spectacular results.

Standing in her way is Celeste, the longtime star of every Oberon show. Emily Scott Banks is outrageous and funny as the local diva—not ready to think about what comes after “ingénue” and “leading lady.” Sky Williams (lately seen in Stage West’s What to Send Up…) is the Black costumer Ida, whose aspirations take a quietly forceful path toward the stage; with Stuart, she starts something of a mini-revolution at the Oberon—and her “character building” gear for the cast (all but one playing “pants” roles) is unforgettable.
And then there’s Winifred, businessman Ellsworth’s socialite wife. Laurel Lynn Collins’ performance is something to see—and I’ll say no more. Buy a ticket.

It’s always interesting to ask the question “Why this play? Why now?” Breeches! lets us spend time in another American era where dangers lurked and outcomes were uncertain. Brant’s lively play is a fine-tuned mix of nostalgia, side-eyes at the America of “back then”—and a timely, laugh-out-loud story about making theater, in spite of everything.