OnstageNTX: BETWEEN RIVERSIDE AND CRAZY 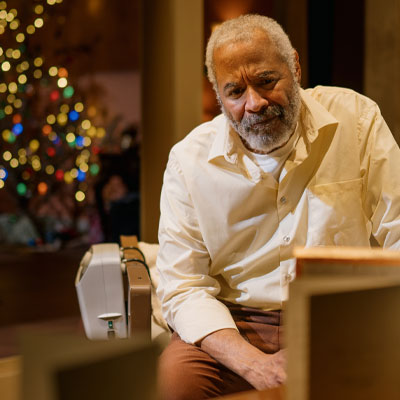 Review: Between Riverside and Crazy at OnstageNTX.com by Jan Farrington

Playwright Stephen Adly Guirgis has us laughing, guessing, and scratching our heads about Pops and all the characters who fill up Stage West’s regional premiere of Between Riverside and Crazy (which, btw, won the 2015 Pulitzer Prize for Drama). Are they good or bad? Savvy, or clueless? Well-meaning, or con artists? In love, or just using? Grieving, or glad to be free?

People are all those things: bitter and sweet, hopeful and grim. Always changing, triangulating, manipulating, trying to guess the odds of the game…if only for today. To tell the truth, I’m a sucker for plays whose characters never say what you think they’re about to say. Between Riverside and Crazy sets up like a Sanford & Son-ish comedy with a cast of wacky characters. But within minutes, we know it’s more than that. This comedy has teeth—and they bite.

Tyrees Allen gives a must-see performance as cagey, cussing, and somehow forlorn ex-cop Walter Washington, a Black officer who “retired” from the NYPD after being shot six times by a white rookie policeman—one bullet, as Pops tells it, for each letter of the “N” word. He’s living large, in the roomiest rent-controlled Upper West Side apartment left in New York City, and won’t budge even though the City is offering him a decent settlement for his injuries, and the landlord has good “cause” to throw him out. The old man could choose a more stable life, but he won’t.

Besides, Pops has a full house. His sketchy but caring son Junior (Irwin E. Daye) has moved home after some jail time, bringing warm and chatty girlfriend Lulu (Hannah Valdovinos). Also in the household is Oswaldo (Tomas Moquete), a moody guy Junior knows from being “inside”—and though Oswaldo seems too foggy to get his own life going again, he’s full of cheery advice about health habits: “Partake of a fiber-rich diet,” he offers, as Pops laps up pie and Cool Whip.

It’s an amusing and noisy bunch, but they’re not going much of anywhere. Pops’ wife (and Junior’s mom) Dolores died before Christmas—and though young Lulu is dressed for summer in shorts and tank top, the Christmas tree (and Dolores’ empty hospital bed) are still taking up physical and emotional space.

Something needs to happen—and because it’s theater, something does. Or rather, a cluster of “somethings.” There’s the possibility of a grandchild—and to our surprise, growly Pops grows an ear-to-ear grin at the thought. There’s a surprise visit from his former partner, Detective O’Connor (Merri Brewer) and her fiancé, up-and-comer Lieutenant Caro (Jim Jorgensen). As Pops guesses, Audrey and Dave haven’t really come for a casual visit: they’re hoping to do good by Pops (and themselves!) by getting him to do what the City wants.

And there’s a mysterious Church Lady (Vanessa DeSilvio), turbaned and mystically minded, whose intentions reveal themselves slowly, rather like a strip tease—and with eye-opening results.

It all acts as a jump-start for Pops, who is back in the game—though we might not notice until the traps start snapping. Then we’re a bit open-mouthed, oh-no-he-didn’t—and this old guy is showing us how it’s done. Life.

Director Ruben Carrazana’s comic pacing feels perfect, but he doesn’t let the sweeter moments slip by: in one room Junior and Lulu are swaying to an old song on Pops’ vintage record player—while he’s dancing alone by the hospital bed, holding a picture of his wife close to his heart. The cast members create vivid portraits—a particularly good trick considering the playwright asks us to re-think how we feel about these characters, sometimes more than once. In this engaging Riverside and Crazy, the whole cast is a standout, and that’s that—I couldn’t pick just two or three.

Bob Lavallee’s set design and Lynn Lovett’s props (three rooms of an Upper West Side apartment) are a detailed delight, right down to the religious pictures and the Harvest Gold refrigerator (missing its kickplate, of course). Aaron Johansen’s lighting, especially the sunlight angling in at the kitchen window (and the hard white light over the hospital bed) are spot-on. Whitney Coulter’s costumes are character driven—and she saves the best for the Church Lady’s late entrance. Fight and intimacy choreographers are listed (Jeffrey Colangelo and Danielle Georgiou do nice work), but you’ll have to discover why for yourself.

I know a career theater guy in Manhattan who says Between Riverside and Crazy has become his favorite play—and I can see it. A complicated comedy is something to treasure.