Onstage NTX: WHAT TO SEND UP... | Stage West Theatre | Fort Worth, Texas
Skip to main content

Onstage NTX: WHAT TO SEND UP... 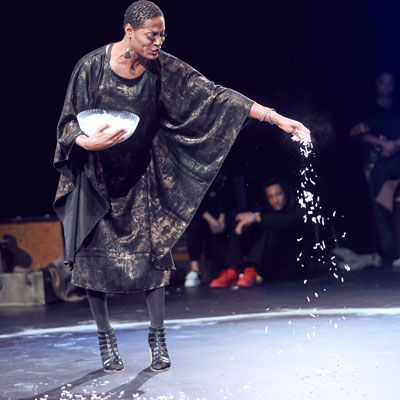 Theater is born out of two ancient practices: storytelling and ritual. Most plays tend to follow a linear, chronological storytelling format. Playwright Aleshea Harris’ What to Send Up When It Goes Down actually returns to the ritual origins of theater—in this instance, a ritual of mourning for Black people lost to anti-Black violence in America. It is also a ritual celebrating Black joy and healing found after times of tragedy or, as is stated in the play’s title, “when it goes down.”

Performances of this regional premiere begin in the lobby of Stage West, while some people still may be greeting each other or finishing up their meals in the cafe. This is where Sky Williams and Raven Lawes enter, coming down the lobby staircase to greet the audience. They give the guidelines of the ritual before welcoming all into the theater space. Audience members may choose to decline from taking an active part in the ritual—but I personally feel that doing so will mean missing out on connecting with the performance as a whole. The audience participation portion only takes up the first 15 minutes of the performance (and the last 15 as well for audience members who choose to stay).

The rest of the performance is a series of vignettes performed in a specific order, with some repeated several times before the ritual is brought to its climax and conclusion. The vignettes remind me of something akin to HBO’s A Black Lady Sketch Show, in that several of the actors play heightened versions of themselves. For the scenarios found in What to Send Up, the actors either enact or poetically speak of the Anti-Black moments they have lived through. The show is quite humorous about this, until it isn’t.

The play speaks on several Anti-Black themes, from being mistaken for other Black people (who one honestly looks nothing like), to being seen as a threat while “brazenly walking in non-Black neighborhoods”; from eating away at your own spirit for the comfort of others, to putting your neck on the line for fighting back against Anti-Blackness.

What to Send Up uses a great deal of metaphor, some of which may be missed if one is not a member of the Black community, or at least a member of the Global Majority. This may be playwright Harris’ intention, as the prologue states this is a ritual intended for Black people. Non-Black people are welcome, encouraged even, to attend and participate.

Still, this is a show written by and for Black people. This was made evident by Stage West’s all-Black cast, crew, and production team. The entire ensemble did brilliant and beautiful work with the piece, from Lee Walter’s delivery of poetic verse, to Raven Lawes’ and Sky Williams’ roles as the ritual’s truth tellers and healers; from Jonah Munroe’s and Brittney Bluitt’s unapologetic movement through spaces not built for them, to Nikka Morton’s gut-wrenching mourning cries and Djoré Nance’s bountiful bass vocals to build community. Vandous Stripling III’s performance makes the heart race and break on his journey through this ritual.

The set, lights, sound, costumes, and props were rather minimalist, though carefully curated by their respective designers: Luke Atkison, Geno Young, Jasmine Woods, and Ashley Oliver. Each area of design added layers to the stories told within the ritual, and let us focus on details which would have been missed without them. As with most rituals, there were strong elements of song and dance. Most of the music and movement pieces took the form of Negro Spirituals, taking one back to a time when all Black people had were the songs and dances of their ancestors to get them through hard times. Some of the pieces break the heart, only to transition into songs that lift the spirit. The artistry of these songs and dances are a credit to the musical direction of Sheilah Walker and the choreography of Kourtney A. Surgent. This entire piece and ensemble was under the direction of the consummate and accomplished vickie washington.

The minimalism of the design concept also directs the audience’s attention to the message(s) shared in the ritual itself, never allowing us to be too distracted by spectacle. In the words of vickie washington’s director’s note: “What to Send Up When It Goes Down …gives us the precious opportunity to come together in ritual, honoring the memory of those whose lives have been stolen from us, and in so doing, bring more healing, more joy and more love of self to and for Black folk. Come heal with us. #onandup.”

I had the pleasure of healing with this wonderful group of artists. I hope you take the time to do the same.