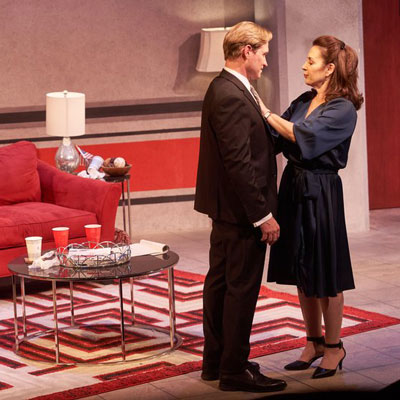 Stage West’s regional premiere of Church & State will surprise you with laughs you didn’t know you had in you. It may stop your heart once or twice, and for sure will make you wish your own family’s political “discussions” could approach this level of humor, smarts and semi-rationality.

And it’s not a bit preachy. Playwright Jason Odell Williams’ comedy/drama about a Southern senator and the Second Amendment runs a tight 95 minutes or so, even with a short intermission for cake and coffee at the Stage West Café. Act One ends on a laugh, and Act Two starts with a surprise—both good ways to get us back in our seats.

Director Jenna Burnett gives Church & State a screwball-comedy pace, but never undercuts the importance of the issues. The comedy is genuine fun that doesn’t rely (much) on Southern-fried stereotypes, though that’s also a thumbs-up for Williams’ script, which makes true, if quirky, human beings out of North Carolina senator Charlie (Ashley Wood), his wife Sara (Shannon McGrann), and Yankee political aide Alex (Madeline Dockery-Fuhrmann), who’s still trying to figure them out. Stir in one all-purpose dude (Ryan Michael Friedman), played mostly for laughs until he chimes in at a crucial moment, and this play’s good to go.

There’s a whiff here of Aaron Sorkin (The West Wing is even referenced as a joke), but instead of the Bartletts, we have the surprisingly sexy but exhausted Whitmores, a political couple in the last days of a re-election campaign. People make mistakes when they’re tired—and in the wake of a school shooting in Charlie’s home town, he lets loose (in a semi-public way) with some blunt words for The Man Upstairs.

Charlie’s shaken faith goes viral, of course, and the verbal shock waves passing between church lady Sara and her husband make it clear his shifting beliefs might rock more than his political future. But their debate (beyond being just raucous and funny) holds our full attention: these two are complicated, intelligent, and willing to think about the other’s viewpoint—even when they’re shouting. Sara and the pragmatic Alex unite over their desperate wish to have Charlie stay on script. In each other, they find more substance than either expected, and begin to edge warily toward something like respect.

Both Wood and McGrann are big, compelling figures onstage, in moments of comedy or darkness. These are two people struggling to get it right, to make their lives matter, to do some good in the world—and not lose who they are in the process. When Charlie worries he isn’t the man for the job, Sara is there to sort him out. When Sara celebrates a political win (“I’m not drunk, I’m HAPPY!”), Charlie folds her up in his arms, friend and lover.

They are people worth getting to know.

Kudos to sound designer Jake Nice for evocative song picks, and to set designer Natalie Rose Mabry for creating a college-colors hotel suite that somehow makes bright feel hilariously bland. And an Onstage note: On February 3, Stage West opens On the Exhale in its studio space, a one-woman play about the aftermath of gun violence. It stars Dana Schultes, the company’s executive producer (“Forty-two pages of dialogue, all for me!” Schultes told the opening night audience), who says Exhale is definitely “in conversation” with Church & State.