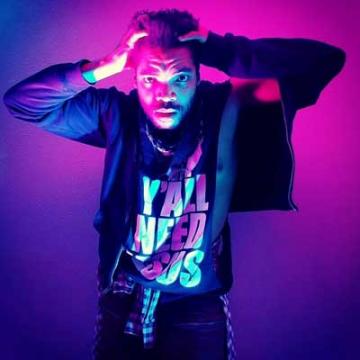 Note: This article refers to the original production location and dates.

Q&A: Kwame David Lilly
A chat with the director and choreographer of the drive-in theater experience Everything Will Be Fine from Prism Movement Theater, performed in a parking lot.

Dallas — This weekend Prism Movement Theater responds to the new challenges of performance in the time of Coronavirus by opening a drive-in theater experience. The play Everything Will Be Fine, written by Zoe Kerr, will be performed in the parking lot of the Latino Cultural Center, and patrons will be confined to their cars with the audio coming through the radio via an FM station. Drive-in movies have made quite the comeback during quarantine and social distancing, and Richardson’s CarBaret series has added some live performances to its weekly films.

But this is the first full drive-in theater experience. We chatted with director and choreographer Kwame David Lilly about the show. Lilly has worked with Prism for three years, appearing in the shows Lear, Apu: Mountain God, Bruno and Louie, as well as various festivals and variety shows in partnership with Cara Mía Theatre, Artstillery, Dallas Fest, and Lone Star Circus.

The production features Kelsey Milbourn, Mitchell Stephens, Ania Lyons, Lauren Floyd, and Rai Thorn, and is performed Friday and Saturday nights this weekend, and July 10-11. The show starts at 8:30 p.m.; get there early to set up and display your ticket from the online purchase on your dashboard.

TheaterJones: Tell me about the idea for Everything Will be Fine. Was the play planned before the pandemic shutdown, or was it written in response to it?

Kwame David Lilly: The idea for a production involving cars has been in the works for Prism Movement Theater for over a year. But this specific storyline involving Covid themes occurred as result of attempting to create a production that adhered to the safety guidelines of the CDC as well as provide a fun experience for audience members and artists.

The news release tells that the play concerns a loss that a woman experiences. Can that loss be translated into a loss/hopelessness that many of us are feeling, with the quarantines and economy and loneliness of not being around other people?

This production follows the journey of a woman that experiences a great loss and traverses the five stages of grief. Although a familiar concept to most, this specific journey will be portrayed through the unique perspective of loss during the pandemic. Naturally, this encompasses a universal theme of loss that we are all currently feeling but experience in vastly different ways. Attempting to adhere to social distancing restraints and being forced to find new means of fulfilling emotional, mental, and even financial needs, proves to be a very challenging and exhausting daily battle.

Tell me about the challenges of directing and choreographing a work seen by people in cars, considering sightline issues. How did you work around them?

Sightlines were actually one of the easier challenges we faced. We opted to keep a single row of cars, staggered so that the headlights of the audience member's cars form a semicircle, as to not block the vision of the car next to it. It was more challenging creating a show that involved virtual rehearsals (via Google Hangout) and adhered to CDC rules once we had to have onsite rehearsals/performances. As professional performing artists that have performed in a variety of venues, we were all accustomed to adjusting our performance based on the specifications of the venue. But performing a show while trying to remain six feet apart at all times, spritzing sanitizer between breaks, keeping masks on while rehearsing and performing, staying hydrated (since we were outside for all rehearsals), it was exhausting for us all.

Also relying heavily on universal gestures that would be easily accessible to our audience who will be dialed into an FM station that we are transmitting music and watching from their cars, influenced several of our movement choices. Casting became a challenge as well, having to find a performance couple, who are the only individuals allowed to touch, as well as other artists who have been properly quarantined. For onsite rehearsals, we had "director's line" chalked out as a reminder to keep our distance while directing performers and would instruct performers to distance properly if we did need to approach the performance space. The movements and themes created were done so that performers, with exception of our couple, would remain socially distanced. We also had discussions on how to check proper social distancing without relying on stickers on the ground.

As a Black theater artist in DFW, what kind of conversations are you having with other BIPOC artists, and also with white people who want to be allies, about the change and momentum around the protests of police brutality/murders of Black people, and also the Dear White American Theater letter and petition.

Stay informed, self-educate, and be an advocate for change. This is the main message that I push for everyone. Although this show does not explore the issues of Police Brutality/Social and Political inequality of BIPOC individuals, we do find ourselves, as the free thinkers we all are, discussing these topics during breaks or after rehearsal. Naturally, we as a company are very mindful of the current political and social climate of the DFW Theatre Community as well as in this country. Hence the reason Prism is very adamant about showing where our support lies. As far as I am concerned, upon discovering Prism Movement Theatre and working for Prism for the past three years, we have always collaborated and performed with a diverse group of artistic mediums and talents. But this is diversity in every way, meaning content, talent, artistic team, partnerships, etc. I have gotten a chance to collaborate with other artists of color and experience an array of culture and artistic expressions. But I have never felt Prism attempting to fill a BIPOC token quota. Literally, every production I have been involved with, whether talent or creative team member, the discussion involves how to cast the production that stays true to the narrative we want to tell.

What changes would you like to see in DFW theater?

I would love to hear more stories from fellow BIPOC about how comfortable they felt in an audition. Or about how they were excited to do a new or existing work that didn't involve the same stereotypical narratives reserved for BIPOC. And there are truly a few companies in DFW Theatre that have been doing this. But for the vast majority that don't or struggle to do so, change up your artistic team/production season or actually listen to BIPOC colleagues you already have. Representation is key. People wonder why they have to see 20 different theatres do Mamma Mia in the same season and it's because you are catering to the same audience. It's hard being in a show that some of your family won't relate to because they can't see themselves in the story. Show support by hiring BIPOC individuals on the creative teams and producing stories that speak to others, whether that is BIPOC, LGBTQ+, differently abled, or economically/socially disadvantaged. And actually speak out about injustices. Just don't be completely silent. And if you are worried about losing money, then you are only contributing to the systemic oppression that exists because people continue to sell out for a coin.

The reality of the pandemic is that the shutdowns could go through the end of 2020, at least. We've seen how artists have responded so far, with online, Zoom and drive-in art ... is that sustainable if it is the only option for the foreseeable future?

If it is truly the only option for the foreseeable future, it has to be sustainable. We, as artists, are often forced to adjust to several restraints, even before the pandemic. Across various artistic mediums, I have seen everyone adapt to the drastic changes that were brought about due to the pandemic. Not saying that every company will survive but art itself will continue to adapt and thrive as it always does. And the people who love to experience said art will continue to support it.

Anything else to add?

I would do a disservice to myself and my entire team (creative, talent, technical, and volunteers) if I don't emphasize the importance of collaboration across the board. Having a literal squad of people that support your vision is key to success in any production. Everyone put full love and support in each other to make this happen. And it kept me pushing through all of the challenges. There isn't a challenge that can't be beat when you have an excellent team, family even at this point. We will all make it through this together. Everything Will Be Fine.