BROADWAY WORLD: Award-Winning Director and Writer Kara-Lynn Vaeni on “In Search of The Sublime”

Kara-Lynn Vaeni discusses her latest work, “In Search of The Sublime; an Online Interactive Performance. With Jokes.”
by Macy Mae Cowart Feb. 17, 2021  | BroadwayWorld.com

Kara-Lynn Vaeni is many things: a Kilroys playwright, the "Best Theatre Director in Dallas 2020" (Dallas Observer), recipient of an NEA grant, and more recently, the mastermind behind "In Search of The Sublime" at Stage West Theatre. She also recently adopted a dog named Daisy Mae, who Kara-Lynn loves and definitely talks to while muted in Zoom meetings. Additionally, Vaeni is a faculty member at SMU's Meadows School of the Arts and the Yale Summer Conservatory. (Told ya she was many things!) In spite of the ever changing world of virtual teaching, Kara-Lynn Vaeni has created a new piece of theatre just months before her first play, Shape, was slated to go into pre-production under her direction.

"In Search of The Sublime" can be best described as "an online interactive performance, with jokes." Below the link to purchase tickets on the Stage West website is a hyperlinked note: "A list of objects to bring with you on your search for the sublime. (Not strictly required, but definitely experience-enhancing.)"

None of Vaeni's works live near words like typical or traditional. In fact, projects that seem impossible to direct are Kara-Lynn's forte.

To get a better idea of Kara-Lynn's thought process behind "In Search of The Sublime," we hopped on a Zoom call. 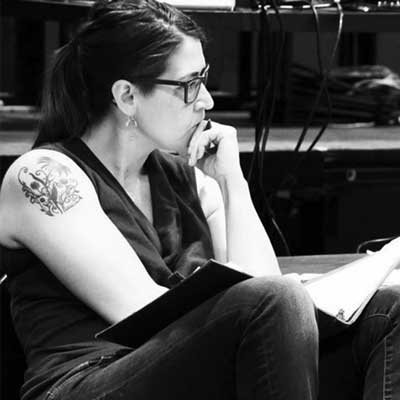 In Search of The Sublime is a product of you asking yourself, "What would I create if I could create anything right now?" What sparked this question?

Well, the question came from this group in Fort Worth called Moonrise Initiative, which is an amazing group of artists. "Artist" is different from other careers, because you make your money from it, but you also get fulfillment from it. Even when you're not cashing a check, the need to create does not go away. I think they started as a group of people who asked, "how can we create given the limitations of space and really not wanting to have people speak in an enclosed room for large periods of time." I know they had a lot of success with their first piece which was an outdoor dance piece and then they asked me if I wanted to create something for them that was not a play. I said, "Yeah like what," and they were like, "I don't know what's on your mind," which is terrifying when there are no limits at all! But I was also like,

"Okay not a play, then what do I want? What do I want from theatre right now? What do I want from art right now?" I really would like to feel something other than continued rage and outrage at our administration at the time, how Covid-19 was not being handled, at the racial reckoning that was and still continues to force everyone in our country to deal with some things that they don't want to deal with or that they just ignore.

I was (and am) just sick of feeling depressed and angry. But to try and be happy felt wrong to me. It felt selfish. And I know intellectually it's okay to be happy but at the time I thought if I'm happy that means I accept what's happening and I don't. So I was striving for something that was the opposite of depressed and angry, but more communal than "happy."

I wanted that feeling you get when you're at any piece of entertainment- that moment when the whole audience and the performers are one. It can happen in a great monologue, or when they have that great line, or in the middle of the solo, or the kick ass dance piece- the thing where everybody gets goosebumps. You're like, "Oh, I'm so glad to be part of something that is outside of myself." I was like, "How can I make that happen?" I didn't even know what that word was and then I was like, Sublime. Sublime feels like a word that involves magic, and it's not a solitary word. It's a word in which you are communing with something outside of yourself. I googled it and Sublime has a long and storied history of being defined and redefined by various young white men in Europe. The German one, Schopenhauer, was the best for me because he was like "there's five levels to the sublime and here are the five levels and the definitions." I thought, "Good. Levels are a structure. I can do that."

What is "In Search of The Sublime?"

It's not a play, but a social experiment in which we say to the audience, "Here are the five levels of sublime. This is what they are. Let's see if we can create them together tonight in the piece." And so we're like, okay we're going for level 1. Here we go. And then we do the thing and then we check in with them like, "So did you feel it? What did it feel like? Where did you feel it in your body?" We have these really specific questions and they, the audience, type it into the chat and then we're hopefully projecting this chat so the audience can watch the performers reading the chat and reporting the answers. Hopefully each level gets bigger and bigger and more intense.

Do you personally connect with any of the characters?

There are two characters that really are me. One of them is the announcer who's kind of shitty and sets all the rules and then tells people that they're breaking the rules, but only once they've done it. It's not, "these are the rules," it's, "oh you just did that. That was wrong and you're bad."
Then there's performer five, who is also me. When the other four performers are like "Great, yes, we're on board," the fifth is like, "I don't- I don't know." So at the end of every level when they ask, "Who felt it?" everyone feels it except her. She never felt it. She's like, "Yeah I didn't feel it cause it's bullshit." It's creating the kind of experience I want to have in my own life, but also one that I'm very suspicious of at the same time.

My hope is that the audience can find a way in and you can find your point of view on the stage no matter how you go.
If you're like "Yes, I'm all in. I want all the yoga and the magic and the Om," there's people for you.
If you're like, "I want it but I don't actually believe in it, so I'll try it but not really," that person is there also.

How did the writing process of "In Search of The Sublime" differ from the writing process of "Shape?"
I'm writing "Shape" and I don't think that anyone is going to read it ever. Once I realized that it was going to be a thing, I knew it was going to happen in a gym and with three people. It all came from my brain, I wrote it imagining a theatre audience and it's fairly straight forward and like, funny, sad, funny, thoughtful.

"Sublime" is devised and I knew it was going to live stream. To create it, every day I would give assignments to the actors and not enough time to complete them. Then we filmed everything and then we would go through it all. At the end of every night, I would ask the ensemble what they thought must stay in the show and what they thought could not stay in the show. Eventually I typed everything up and now it's a script that anyone can use!

What should audiences know going into the show?
That I know we all have major Zoom fatigue, and I'm sorry! The main reason I'm using Zoom as the streaming platform is because people can participate via the chatbox with very little time delay. The actors are all in a studio so you won't be seeing a lot of different boxes turning on and off.

When you buy tickets there's a list of five things we ask you to have with you. We will incorporate these in magical ways that are completely optional.

Would you say that this show will leave audience members feeling artistically involved and fulfilled? Like they have found their sublime?
I hope so.
I know of the online shows I have seen, the ones I have enjoyed the most have been the ones where they leave the chat feature on. That to me is the most involving because when I'm in the theatre all I wanna do is respond to the show in real time with my friends. And now I can and I won't disturb anybody and I can hear what other people think.

Anything else you want to share about the show? Possible spoilers?

Agghhh! Yes, but I don't wanna spoil. I will say that I think we are playing with audience interaction in an interesting way. Our goal is that when you see this, you won't feel like it's "second best" to being in a theatre. You'll feel like this show was written for you, right now. Because it was.