John Garcia's THE COLUMN review of WHAT TO SEND UP... | Stage West Theatre | Fort Worth, Texas
Skip to main content

John Garcia's THE COLUMN review of WHAT TO SEND UP... 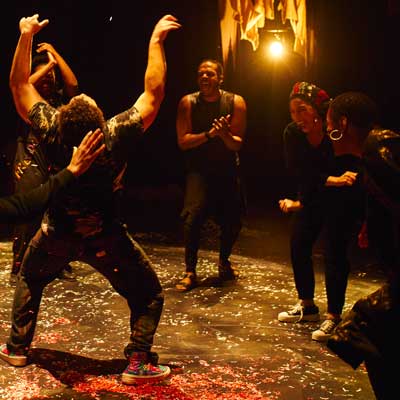 In a 2019 interview with American Theatre Magazine, playwright Aleshea Harris said, in part, “let it be messy.” Her thoroughly original play, What to Send Up When It Goes Down, enjoyed a critically acclaimed premiere in New York City in 2018. The work is described as, “a play-pageant-ritual response to anti-Blackness,” and received a special commendation from the Susan Smith Blackburn Prize. Director vickie washington describes the play as “the precious opportunity to come together” in a “ritual/pageant/performance/homegoing celebration.” (Quotes from the Stage West Playbill).

In short, this theater experience is unique. It is trail-blazing. The audience experiences something absolutely new.

The play begins in the lobby, where we are asked to wear black ribbons in memoriam of the victims of anti-Black violence. The Stage West Theatre’s stylish lobby space is adorned with pictures of some of these victims. Certain names and faces are more familiar than others. To honor their untimely, tragic deaths, this play explores the reality of systemic racism by employing a variety of means and pulling inspiration from different genres.

After the actors and audience move from the lobby and into the theater space, Character Two (the beautiful and commanding Raven Lawes), leads us in audience participation laying the groundwork for the exploration of the toll of systemic racism. We are arranged in a circle as we step forward and back and take turns with one-word answers.

Circles emerge as both a visual and conceptual theme. The cast dances in a circle while creating a physical circle that remains on the stage floor. White petals are sprinkled in circles. And, thematically, the play circles back to specific characters and scenes, building upon intense and sometimes surreal storylines.

The audience participation at the beginning of the play serves to demonstrate the frequency of violence against Black people. That anti-Black violence is ubiquitous and inescapable for all Black people in this country is a recurring theme. One recurring character, played by Nikka Morton, leads the cast in a mesmerizing and achingly beautiful poem listing the places—tangible and intangible, corporeal and incorporeal—where the burden of racism is felt. It is a poetic recital that the cast performs with perfect synchronous delivery, drilling into the theme that there is no safe harbor from the scourge of racism, which is both psychologically and physically damaging.

The production includes dancing, singing, poetry, comedy skits, a funeral rite, and expressions of raw emotion. The audience is treated to gorgeous a cappella singing and lively choreography. The cast dances with sharp synchronicity. The choreography appears completely original, with elements reminiscent of West African dance.

The sound effects facilitate the multiple changes in scene and tone. For example, one recurring sound that seems to come from the ether is a comedy prompt. One (Nikka Morton), Five (Djoré Nance), and Six (Jonah Monroe), star in a recurring storyline about white privilege. Monroe dons a white hat and gloves and hilariously preens as a “liberated” white lady who basks in the self-affirming delusion, “my hands are clean.” She is triggered by the very word “privilege,” revealing that she should know better. Nance is brilliantly expressive as a servant who is misused like a piece of furniture. He fakes unsophisticated speech to keep his job, because unemployment means falling out of the circle of society, over the edge, and into the margins. The Character One’s rage starts at a low simmer before boiling over. These characters recur throughout the play, and the bit has a fascinating, abstract quality in illustrating the white lady’s oblivion to the effects of her conduct and One’s reactions. Morton’s phenomenal performance starts as straight-up comedy (for example, she saunters “hips first” as an act of rebellion) and evolves into heartbreak.

Thoroughly gorgeous and effortlessly regal, Lee Walter as Three glides on and off the stage, explaining her thankless and futile interactions with disconnected white people. Her intense monologues have a poetic meter. “I try, I do not take offense,” Three explains. She must cage herself into a “warm and fuzzy blackness that does not disrupt brunch.” Throughout this play, the use of language is rich and evocative.

Four (Sky Williams) and Eight (Brittney Bluitt) initially appear as two bright and bubbly girlfriends talking about their workday, which took a decidedly surreal turn after a white coworker claimed, “I don’t see color.” Williams and Bluitt do a great job with a storyline that starts out completely ordinary but takes a bizarre turn.

Another recurring, and tragically timely, storyline explores the peril to safety and identity of having white friends and “brazenly” being in “their neighborhood. You know they hate that.”

Seven (Vandous Stripling II) does a perfect job delivering an increasingly intense monologue on why a Black man can be different things, but never a fool.

The sophisticated light design beautifully meets the challenges of multiple scene changes, in which the mood, movement, and format of the action frequently metamorphosizes. The changes in lighting serve to transform the space, as the nature of the performances themselves erupt into different forms of expression. The set is a black box, with draped and hanging overhead cloth serving as the outline of trees.

The costumes are intriguing. They share a visual continuity in that they are in the main black, with red, white, or gold exceptions for accessories, words, or decorative embellishments. All must accommodate dancing.

A sign hanging above the entrance, inside of the lobby, reads “Stage West A Living Theatre.” That is the truth. This production is among the most contemporaneously relevant theater experiences you will find anywhere. It is a reaction to the anti-Black violence we keep seeing in the news, and the playwright intends to heal, and also reveal it. To call this production original and groundbreaking is an understatement. Nothing is like it. Do not miss it.