John Garcia's The Column Review of INTO THE BREECHES! | Stage West Theatre | Fort Worth, Texas
Skip to main content

John Garcia's The Column Review of INTO THE BREECHES! 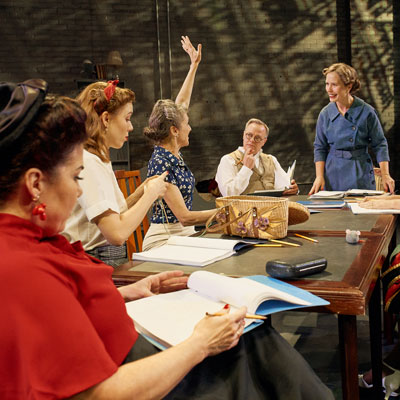 It was absolutely refreshing to step into the newly renovated Stage West Theatre Saturday night for their opening performance of Into the Breeches! They have a new box office and have new seating, a restaurant area, and decorum. My guest and I were especially curious about the 1940s cigarette dispenser with the macrame art inside. The smell of homemade meatloaf flooded my nose from the kitchen, behind the fully stocked bar. Patrons were buzzing with the excitement of being in the theatre and what this regional premiere was all about. Stage West never fails to provide a complete theatrical experience from the time you walk in the doors until you exit.

Into the Breeches is a fun and witty story of the Obrion Theater fighting to keep pushing forward and keep theater alive amongst the trials of World War 2. The year is 1942 and the men are off to war. Maggie Dalton, the wife of the resident director of The Obrion, performed by the talented Dana Schultes, has been tasked with the impossible feat of putting together an all-female cast of Shakespeare's The Henriad. Dalton begins onstage alone with nothing but a black box theatre and a single light in the middle of the stage. She does a beautiful job of taking the audience in, as she prepares us for the story that is about to unfold. She is shortly joined by Celeste Fielding, one of the company's well-seasoned female members who are exceptionally talented and a diva in her own right, played by the beautiful and sassy Emily Scott Banks. Celeste reflects a lot of myself as she reminisces on the ghost of shows past after not being on the stage for such a long period of time.

After convincing Celeste to join the cast as Prince Henry. Maggie goes to meet with the Obrion’s reluctant producer Ellsworth Snow, performed by the comedic and confident Bradley Campbell. Campbell does a fantastic job of playing the hesitant money wielder who has many objections to the forward-thinking of Maggie’s direction but is swayed by his love and desire to support his sweet wife Winifred Snow, played by the side-splitting hilarious Laurel Lynn Collins. Who loves the theater and is asked by Maggie to join the cast.

Maggie holds auditions for the show with the help of her stage manager Stuart Lasker, performed by the hilariously gifted Mark Shum, and the resident costumer of many years Ida Green, portrayed by the brilliant and bold Sky Williams. At the auditions, the rest of the cast is comprised of the only two actresses who auditioned for both war wives June Bennet, played by the lovely Amber Rossi, who is sweet as pie and really interested in the war effort, and Grace Richards, played by the clever and inspiring Laura Lyman Payne who has a natural talent for the stage, but does not have much experience as she has spent most of her time being a wife and mother to her young son.

Maggie scrambles to find a way to make the show work with such few cast members but pulls it all together and starts with the rehearsals of the show. As the show progresses, the audience gets an inside look at some of the challenges that theatres face behind the scenes of a production and some of the funny and dramatic moments that go into the creative processes of rehearsals. This show tackles some pretty relevant circumstances including many civil rights issues of the time and does so beautifully. The play also shows the emotional challenges that women and war wives faced with their husbands away at war, which I can testify myself as a navy wife, is still relevant today. I think I saw a few grown men shed a tear or two in the audience.

I was most impressed with the costumes of this show by Laurie Land and was in love with all of the women's shoes. The 1940s is an iconic era and the actors all looked spectacular. Praise must be paid to the lighting design by Jessica Ann Drayton. One of my favorite touches was how the lights would slightly dim right before they would go into their Shakespearean monologues. It gave me chills almost every time and was a marvelous addition to the aesthetic. Kudos must be given to the sound design by Rayven Harris which assisted in making the scene changes flow so flawlessly.

Joanne Zipay did a remarkable job directing this cast and production team in creating and bringing Into the Breeches! to live on stage. I so thoroughly enjoyed every single element that went into this production for there was not a single flaw found. A resounding wave of plaudits to the entire company of this uproarious play now playing at Stage West! Into the Breeches! was a 10 out of 10 which I HIGHLY recommend you rush out and get out to see it….that is if any tickets are left!!