Exactly a year ago, theater director Kara-Lynn Vaeni was helping Dallas build and maintain a flourishing theater scene packed with stellar and wide-ranging productions. Dallas and Fort Worth theaters were showing us some of their best work during the 2019-2020 season before the promising future for local theater was struck down, like everything else in the world, by COVID-19. Since then, Vaeni has been reflecting on what made theater such a vital part of her life and what we can do to keep the pulse of theater alive a year into the pandemic.

A year after her production of The Children at Stage West Theater was quickly moved online at the start of the pandemic, Vaeni is bringing a new production to Stage West via the Moonrise Initiative. The piece is called In Search of the Sublime, and while it isn’t technically a play, and its performers aren’t technically actors (thanks to COVID and union reasons), it very much reflects the value of theater in our lives.

The show will be performed online March 4 through March 21, and it won’t be a typical Zoom production: Each night the show will be performed live, and the audience even has the opportunity to interact and shape the show. Vaeni made the choice to do a live production with audience interaction in order to make a theater piece that isn’t second-best to a live stage production. This is because there is one vital question when it comes to watching a play on your laptop or your TV screen: Why should I be watching a play, which was made to be seen in person, instead of watching something on Netflix, which was made to be seen on a screen?

“How hard would it be to make a piece of theater that you can watch on your computer screen and still feel like, this is not second best, this piece was made for me to watch [on a screen], but it’s also not a movie and it’s not TV?” says Vaeni. 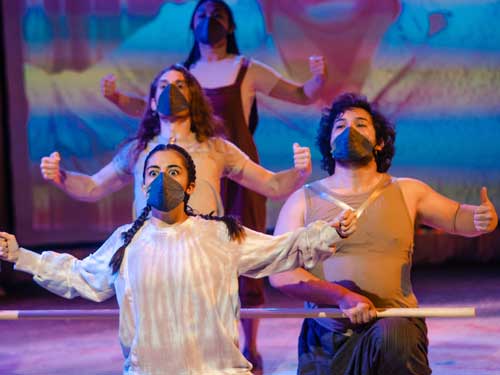 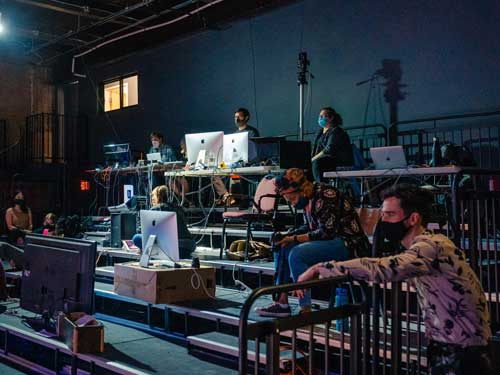 It isn’t enough to just make a high-quality production that fits well with a virtual format — because that already exists in the form of TV or film. In Search of the Sublime isn’t just a theater piece that would have been better if it was performed in person, and it isn’t just a movie made by people who usually make theater. It is a piece of theater meant to be viewed on a screen that still keeps alive the central beat of theater. But what exactly is that? Vaeni asked herself the very same question when she began creating the work.

“What does theater bring me? Well, for me it’s always those moments in theater when something so outrageous or amazing happens and you and the audience and the actor all are like, ‘We are one being right now.’ You kind of get taken out of your body and you get goosebumps and you’re like, ‘Everything isn’t terrible!’”

Next she asked, “I wonder if I can make a show out of that.”

Trying to pin down more precisely the near out-of-body experience that theater can create at its best lead Vaeni down some aesthetic rabbit holes.

“I want to go beyond just happy, because happy is like an individual thing," she says. "Connection isn’t the right word because it’s overused, it means a lot of things. What is it?”

Then, she stumbled upon "The Sublime," an aesthetic principle for which one can find a vast number of definitions but consistent to all of them is the presence of “overpowering feelings that take your out of your body for a minute,” Vaeni says.

A lot of people have written about the Sublime throughout history, but Vaeni is following Schopenhauer’s approach. In the typical manner of German philosophers, Schopenhauer took an extremely precise and categorical approach to the Sublime: he described exactly five levels, giving definitions and examples of each.

Vaeni instantly saw the advantage of Schopenhauer’s approach: “Five levels is five scenes,” she realized, and the lightbulb went on. Thus, In Search of the Sublime was born.

“It’s not a play, it’s an experiment, in which the poets and the audience try to create each level of the Sublime one at a time,” she says.

The show features five poets who are following along Schopenhauer’s five levels. Four of the poets are enthusiastic — one of them is cynical, as many of us would be if we were told to go and experience the Sublime ourselves. But by joining these poets, and especially the fifth, cynical poet, on their search, the viewers get to search for their own instance of the Sublime.

This makes for an exciting and creative approach to pandemic theater — just what we all need to experience a little of the Sublime in our own lives.