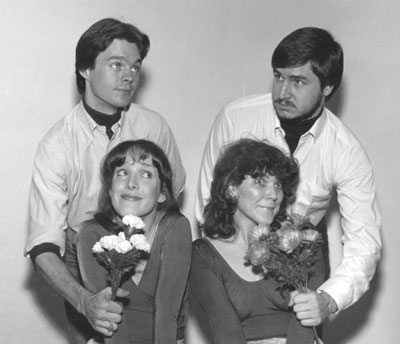 How long have you been coming to Stage West?
I have been a patron of Stage West for a very long time. I remember coming over from Hurst where I used to live.

How did you become interested in theatre?
I love live theatre. I will go to live theatre before going to a movie. In fact, I haven't been to the movies in years. Jacques Brel Is Alive and Well and Living in Paris (pictured) was the first show I saw at Stage West (at least the show that stuck out the most). It was dinner theatre back then. You stayed in your seat as the show was performed. The play itself was riveting! I really enjoyed the music. There is a kind of energy that comes from the stage to the audience in really great productions. That production (Jacques Brel) had it. I hope that same energy gets reflected back to the stage. The actors in that production had a very special energy. It was intimate.

What do you like about Stage West?
The variety of the productions that you stage. Musicals, contemporary dramas, classics...Variety is brought to the audience through Stage West’s productions. Also the quality of productions amazes me. I know when I bring friends to the theatre they will have a great time. When we were in the pandemic and everything shut down one of the things I missed most was theatre. When the lights go down and come back up and you see the world through someone else's lens - it rivets me. I am glad theatre is back.

What is your favorite show of this season?
Scrooge in Rouge. I enjoyed seeing the four actors playing different parts. The young man who played the ingenue just blew me away. I like theatre that makes me think. On the way home I want to ask questions. I watched both Church and State and On the Exhale. I was in Dallas in ‘63 and heard the shot that killed Kennedy. When the gunshot happened in Church and State it really impacted me. Both shows made an impact.

What words would you use to sell SWT to a friend?
Quality. When you go to Stage West you know you are going to see people who are good at what they do, doing it at their best. I would also use the words thought-provoking. I have been a season ticket holder for at least 30 years. I remember telling Jerry Russell once that I can give what I can to keep the theatre going. I will continue to do that. If you want quality, you must show your support and give.

We thank Sandra for her long-time support of Stage West our local arts scene!