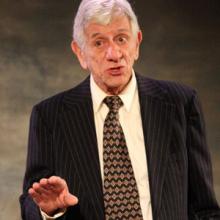 Stage West is pleased to announce the theatre’s main stage space is being renamed the Jerry Russell Theatre, in honor of the organization’s beloved founder and long-time leader, Jerry Russell.

Stage West was founded on October 18, 1979 by Jerry Russell, on Houston Street in downtown Fort Worth. The first space was a 65-seat storefront theatre next to Russell’s European Sandwich Shoppe. The success of the first production necessitated the merging of the two spaces into a modest dinner theatre seating around 100. Before the end of the second season, Stage West had formed a Board of Directors, and moved to a new 9,000 square foot space at 821 W Vickery, converting the former warehouse into a theatre with a spacious front area. The theatre would remain at this location for ten more seasons, growing its subscription base and professional status.

Investigating the possibility of owing its own space, Stage West eventually found its way to the old TCU movie theatre at the corner of University Drive and Berry Street. After ten exciting years, the theatre sold that building and moved to the Fort Worth Community Arts Center. In time, the group discovered that its former space on Vickery was still available, and following a four-month renovation, Stage West opened its doors again at the Vickery location. And now, as of January 2018, Stage West officially owns its own building.

The spirit of Jerry’s original model is still in place. And the group is now expanding and renovating its home to more fully reflect the legacy started by Jerry - a professional theatre destination serving Fort Worth, Dallas, and beyond with innovative and entertaining stories that entertain, inspire, and challenge us, and creating an indelible imprint on the cultural landscape of Fort Worth.

Temporary signage will be put into place near the entrance to the main stage space, and once the renovations for the current Setting the Stage for the Future are complete, a more permanent treatment will installed. With the naming of the Jerry Russell Theatre, Stage West would also like to announce that naming rights are currently available for the second space (currently known as The Studio) for $400,000.00. This space will undergo extensive renovations in the coming year, complete with state of the art equipment and a flexible seating area with up to 200 seats.