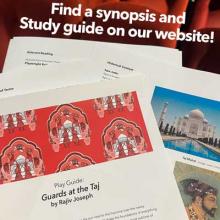 Do you like to have a full synopsis of the play prior to attendance? Do you wish you knew more about the historical background of a show? This season, we have created some new resources for our audiences. Find links on show pages, in the pale orange "Performance Schedule" block.

Stage West has exciting outreach programs slated to take place in the 2022/2023 Season. Below  is an update on some of our most impactful offerings.

Beginning in the fall of 2022, the theatre will formalize a partnership with the Stayton Retirement Community to start a performance-oriented class. Interested residents of the retirement complex will take part in the troupe, which will have small performances for other residents a few times a year. Stage West has long wanted to take part in a venture that facilitated access to performing arts to retirees as a positive creative and social outlet.

Led by Linda Leonard, an actor, director, and ever loyal supporter of Stage West, these classes will be a wonderful addition to the theatre’s current outreach offerings. Ms. Leonard has directed for the Dallas Library Project over the years, bringing theatre to many of our senior living communities. When that opportunity concluded, she began teaching acting at CC Young in Dallas, which included incorporating original works from the actors, Neil Simon, Carol Burnett sketches, radio plays, and a little Shakespeare, to name a few genres. She loves collaboration, and enlivening and encouraging artists of all ages to find or rediscover their inner artist.

Stage West will provide updates on the happenings of the Stayton Community Players through the outreach section of our website.

Due to generous grant funding, Resident Educational Playwright and Outreach Instructor Rob Bosquez will once again provide playwriting workshops in K-12 theatre classrooms during the school day. One of our exciting new school partnerships is with North Side High School, a school that submitted and went on to have winning entries in last year’s annual Neighborhood Play Contest.

By providing in-school workshops to North Side High School, the Stage West staff hopes to continue to build strong relationships with Title I schools right here in our own Fort Worth community, while at the same time expanding to surrounding schools and districts. Mr. Bosquez has over 20 years of experience working with youth in all areas of performing arts, and feedback from both teachers and students has been positive. Over the years, many individuals have found his workshops to be a unique opportunity for creative expression of students’ accomplishments, life experiences, struggles, and ideas.

Stage West’s 2023 Design Apprenticeship Program is a pre-professional training program for college students in the areas of Sound, Scenic, and Costume Design (a fourth section for Stage Management is available this year). Participants will meet with a mentor in their respective design area to create work for a professional portfolio, and have a hands-on learning experiences during the design process of season programming.

The Design Apprenticeship Program launched in 2022 with the goal to give theatre-makers of tomorrow the vital skills needed to succeed in a professional theatre setting, thereby opening doors for college-aged students to have future job opportunities in their area of interest. For the foreseeable future, the program will center around diversity, equity, and inclusion - with a strong emphasis on recruiting women, students of color, the LGBTQ community, and other underrepresented groups.

Stage West will seek three students in each area of study as they actively engage in the pre-production and rehearsal process of season programming. Upcoming participating shows are Handle with Care, The Play That Goes Wrong and Cruel Intentions: The 90's Musical. The students chosen for this program will have the opportunity to collaborate with Stage West on Festival of the Kid and the Summer Conservatory.

College-age students interested in participating in the Design Apprenticeship Program can reach out to Tonya [at] stagewest.org 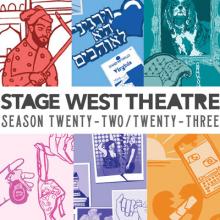 Stage West is excited to announce the lineup for its 44th season!

The new season will feature six shows, two of which will be co-productions. Three will be presented in the Evelyn Wheeler Swenson Theatre (“The Evie”), and three will happen in the Jerry Russell Theatre.. It’s a unique mix of 5 plays and 1 musical, which range from laugh out loud funny to breathtakingly beautiful… from campy and naughty to warmly moving and kind.

Guards at the Taj

India, 1648. Two hapless Imperial Guards watch from their post as the sun rises for the first time over the newly-completed Taj Mahal. But the morning light brings with it an unthinkable task that will shake the foundations of everything they thought to be true. In this disarmingly funny and deeply moving story, two friends behold the most sublime of wonders and discover the perils of bearing witness to perfection.

“Keeps us entertained - and totally unprepared for some shocking plot turns.” – The New Yorker

A young Israeli woman on holiday with her grandmother in the United States is confronted by an unexpected turn of events. Now, she finds herself stranded in a motel room on Christmas Eve with an oddball delivery man. Is their meeting an accident, or is it destiny generations in the making? Hilarious and tragic circumstances culminate in a heartfelt romantic comedy about what you can find when you feel lost.

The Play That Goes Wrong

Welcome to the opening night of The Murder at Haversham Manor, where things are quickly going from bad to fiasco. With an unconscious leading lady, a corpse that can’t play dead, and actors who trip over everything (including their lines), the whole evening is a disastrous smash. Chock-full of mishaps and madcap mania, this classic murder mystery is sure to bring down the house!

Created by Jordan Ross, Lindsey Rosin, and Roger Kumble
Based on the film by Roger Kumble
Music Direction and Arrangements by Zach Spound

In an epic game of cat and mouse, two diabolically charming step-siblings place a bet, and vow to destroy anyone who gets in their way. Seduced by passion and revenge, this devious duo spins a web of dangerous liaisons, and they soon find themselves entangled in the cruelest game of all: love. Based on the cult classic film and featuring your favorite 90’s hits, this new jukebox musical is utterly intoxicating.

I Wanna F*cking Tear You Apart

Best friends and roommates, Sam and Leo are an unbreakable team. But when a new friend enters the scene, doubt creeps in, and a shattering secret is about to be dragged kicking and screaming into the light. A hilariously modern ode to the complications of friendship in its many messed-up forms, with a special nod to a kind of love that sometimes looks a lot like rage.

Bill and Nancy are fifty years into their marriage. They can anticipate each other’s every sigh, snore, and sneeze. But just as they settle comfortably into a new senior living community, the unthinkable happens - Nancy wants a divorce. This funny, shocking, and intimate story takes an honest look at the unpredictable, complicated, and enduring nature of love.

Season tickets will go on sale to the general public July 19, and will include the Bargain Season Ticket (good on Thursdays only) at $155 each, the Standard Season Ticket at $210 each, the Premium Season Ticket (which  includes several great additional perks) at $318 each, and the Select 4 Season Ticket (patrons choose 4 shows from the list) $152 each.

For more information, call Stage West at (817) 784-9378.  Tickets and information will be available online soon at www.stagewest.org.