"Grow Up: Annie Baker's The Aliens gets a quiet and sublime production at Stage West." | Stage West Theatre Ft. Worth Texas
Skip to main content

"Grow Up: Annie Baker's The Aliens gets a quiet and sublime production at Stage West." 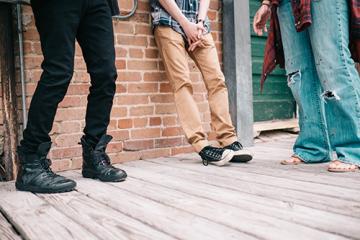 Three men in the scruffy outback of a Vermont coffee house watch Fourth of July fireworks explode in the distance. The youngest of them looks up and over our heads toward the lights. Slowly, his face takes on a sheen of pure joy. Behind him another man, not quite so young, dances around and around in the yard, waving a lit sparkler that trails a shower of stars.

The moment glows—not just on the stage, but in the audience.

And we’re left to wonder: just how does Stage West’s production of Annie Baker’s The Aliens—gentle and bittersweet, at times exasperating—get us here? In a play that deals as much in silence as speech, with characters who reveal themselves only in bits and pieces, how do we reach this brief moment of communion—feeling so entirely happy that they are happy?

Because Baker’s Obie-award-winning Aliens (she won the 2014 Pulitzer for her play The Flick) is an altogether oblique and sideways slide into un-theatrical theater. No big speeches here, and not much forward-moving plot. The play’s dramatic action mostly takes place offstage, not on. And what’s left onstage is something like—but not the same as—real life, with characters who give us more hints than facts, who make us laugh and drive us wild precisely because they feel like people, not creations. They are too much like someone we’ve known, or perhaps (God help us) even loved. (Baker, along with playwright Young Jean Lee, whose Straight White Men just closed at Second Thought Theatre, is another student of influential post-modernist playwright Mac Wellman of Brooklyn College.)

Yet there is plenty here to see, hear and ponder—if you’re willing to let less be more.