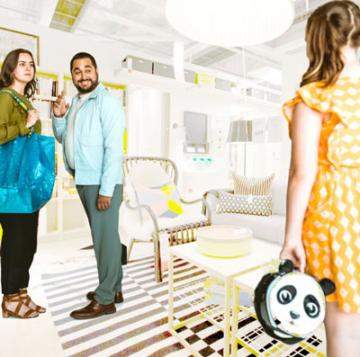 Fort Worth — Inhale. “Are we good people?” This is the question that reverberates through Duncan Macmillan’s Lungs. Are we good? What does being good mean, and how do we perform “goodness”? And, as the protagonists of the play spend a majority of the action agonizing over, is it good to bring a child into a world growing hotter by the day? The play, a breathless 85 minute sprint, is performed on a mostly-bare stage, with minimal stage directions, and relies entirely on the actors’ chemistry and their facility with MacMillan’s rapid-fire dialogue. Stage West’s production, starring Ruben Carrazana and Dani Nelson, is a tour-de-force two-hander, giving life to two characters who we may not always like, but who feel uncomfortably familiar.

M (Carrazana) and W (Nelson), a pair of thirtysomething, mildly neurotic millennials, are shopping at IKEA when M throws W for a loop: should they have a child? W instantly begins to spiral: “It’s like you punched me in the face, then asked me to do a math problem.” Their issues may start with whether they can offset Baby’s carbon footprint by planting trees but eventually dredges up every insecurity and exposes every crack in their relationship: their relative earning potential (she’s a whip smart and unemployed Ph.D. candidate, while he works part-time at a record store while pursuing eventual rock stardom), their gender roles, how they have sex, who hates whose parents and whose parents hate them, etc. They bicker (in carefully controlled “I” statements) and fret and provide examples of their virtuousness (they recycle! They watch Maddow! They watch films with subtitles!). Aren’t they the type of people who should be reproducing? Round and round they go, coming together and springing apart, dialogue overlapping in fits and starts as they make tiny concessions towards self-improvement before their baby arrives: a new job for him, she’ll quit smoking (after this one), he pilots a green initiative at work. But once reality crashes down—she’s pregnant—can their relationship survive the strain? Are they the “good” people who’ll do the work of saving the planet, or will they, and it, go up in flames?

The title of the piece is presumably meant to conjure up images of choking smog, but could as easily be referring to the stamina required of the actors in keeping up with the lightning-quick dialogue. Nelson especially is tasked with some incredibly long monologues (one of which is hilariously performed during a vigorous yoga routine, while another is suggestive of being trapped in a sort of endless onstage maze full of blind corners), which she carries off with a sort of splendid obliviousness. Her W is a mess, but a highly plausible one; mired in uncertainty but full of gentle self-importance, Nelson still manages to make you feel deeply for the character, like a friend you love, but maybe in small doses. Carrazana has perhaps the more difficult role in some ways. His character certainly speaks less than Nelson’s, and this in combination with a certain placidity to his face when in repose can make him seem difficult to read at times (to be fair, the character is referred to in the script as being “impenetrable”). But as the action intensifies, Carrazana manages to create a real emotional arc for the character, suggesting growth and level of heretofore unseen maturity. Director Carson McCain clearly fostered a real sense of intimacy between the actors, which shines throughout. Both display an incredible grasp of their character’s inner lives and of the play’s interweaving dialogue, and, despite being conveyed solely via the actor’s physicality, scene changes were always crisp and clear.

Though the play’s stage directions call for a bare stage, most productions have incorporated some form of backdrop, and set designer Clare Floyd Devries (a frequent collaborator on the DFW theater scene and a member of Dallas’ Kitchen Dog Theater) has designed a very striking one. Center stage is a sort of art installation of suspended glass bottles of various colors (deep greens, blues, and browns mixed with clear glass), in an abstract pattern that, to this reviewer at least, was suggestive of a world map while the bottles of course serve to reinforce the play’s environmental themes. Costume designer Evan Michael Woods keeps things simple, dressing both actors in utilitarian, mostly earth-toned pieces.

It’s hard to categorize Lungs, full of sharp edges and sometimes brutal honesty, but in the end, it is a love story, if told somewhat slant, and Stage West’s production encompasses all the mess of love in these uncertain times. Exhale.