A chat with Laura Payne on the endurance of Shakespeare | Stage West Theatre | Fort Worth, Texas
Skip to main content

A chat with Laura Payne on the endurance of Shakespeare 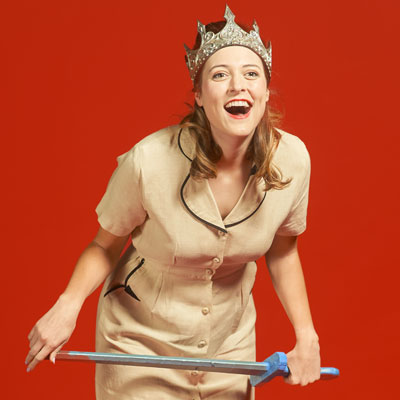 Q: In this play, a group of actresses (and an actor or two) are working to put together a production of Shakespeare’s Henriad trilogy in the thick of World War II. Shakespeare’s text and stories resonate with the women in the play, and will also likely resonate with Stage West audiences seeing and hearing the production. As he continues to be one of the most produced playwrights in the world, what do you think it is about Shakespeare’s plays that continue to resonate and entertain today?

Laura Payne: Imagine a ten-year-old girl, sitting in front of the television set watching Henry V with Kenneth Branagh absolutely mesmerized. As a burgeoning theater kid, obsessed with the televised production of West End’s Cats, the Brandy Cinderella, and the 1955 Oklahoma!, my mother quickly recognized a pattern; so, in popped the VHS of the 1989 Henry V. This ten-year-old was hooked. I was entranced by the language, the drama, and the poetry. I could watch Henry woo the French Kate over and over again. I was fascinated with the character of “the boy,” and wanted to play him as soon as I could. My mother, seeing this intense reaction, then popped in the 1993 Much Ado About Nothing (also Branagh) and I was hooked again! I loved watching the comedic tricks, the love stories, and the witty language. I loved watching Emma Thompson quip, “a bird of my tongue is better than a beast of yours” as much as I had loved Branagh’s rousing “we few, we happy few, we band of brothers.” Soon after, I begged for a complete works of Shakespeare, mostly to have on the shelf and not yet read. But no fear, by age 13 I was reading them all. I attended a reading focused school and in fifth grade we started reading abridged versions of Shakespeare, beginning with Romeo and Juliet (“a rose by any other name would smell as sweet”) and (my favorite) Much Ado About Nothing. We even got the chance to perform Much Ado, and although I did not get to play my dream of Beatrice, I jumped in gladly to play the benevolent Prince Don Pedro. After that, we read a Shakespeare a year, it was Julius Caesar (“e tu, Brute”) in 6th grade, Henry V (again for me) in 7th, and The Merchant of Venice (“the quality of mercy is not strained”) in 8th. Not to mention by 18 I had read As You Like It, Twelfth Night, Macbeth, Hamlet, A Midsummer Night’s Dream, and Antony and Cleopatra. By 18, I had consumed almost a third of Shakespeare’s canon.

I start this way not to make any points about my reading prowess, most of these were read only after watching their film adaptations. But more to turn the question, “why does Shakespeare’s work resonate with audience all these years” back on myself. For why was a young girl who barely understood the language and the poetry (and let’s face it, most of the humor), so enthralled by this playwright?

First, story. Little Laura was simply obsessed with the stories. Whether comedy or dramas or histories, western literature has followed in Shakespeare’s footsteps when it comes to storytelling. Whether it’s the playboy turned king and hero (The Henriad), the antihero (Richard III), mistaken identities (Twelfth Night or As You Like It), or star-crossed lovers (Romeo and Juliet), these tropes and stories are familiar to us now. If acted well, you don’t even need to understand every word of Shakespeare to know where the story will go. It’s an intense feeling of familiarity without even realizing it, and I think that is part of what childhood me loved so much about these movies, and then subsequently the scripts themselves (once she got a bit older and could actually understand them). And I believe that’s why we love seeing Shakespeare still today. Not to mention, these stories are extremely adaptable and is it not such a joy to see them done in different ways!

And that gets me to my second reason why we all love Shakespeare so much, the language. Even if I couldn’t quite understand every word, I understood the feeling. Great poetry is not about word for word understanding, it is about what the words evoke. In some ways, Shakespeare’s plays perform like fairy tales, with heightened language that makes everything seem more beautiful, more important, or more hilarious. Even after saying the St. Crispin’s day speech every day in rehearsal, I still get chills reciting, “then he will strip his sleeve and show his scar and say, these wounds I had on Crispin’s Day.” Try saying this line for example and take note of how many s-sounds are in it. A quick google search and you’ll see this is called sibilance, and sibilance is often used to create a drawing in or immersive response for the listener. I mean, call that genius. To use sibilance during a speech wherein a King is inspiring his men to not fear battle. And this kind of language and poetry is in so much of Shakespeare’s work! It’s why when writing this I can think of a line from every play I have mentioned. It’s why we keep coming back, to watch the fairy tales. Not just the stories themselves but also the way in which they are told.

The Shakespeare nerd in me could go on and on and write speeches and speeches about why these plays are still produced. But I’ll end here. Take a moment to think of your favorite Shakespeare line, and if you don’t have one, just flip through that old Complete Works by William Shakespeare that you probably have on your bookshelf, and I bet you’ll find one you like pretty quickly.