In Search of the Sublime is a devised show. “Devised theatre” is a form of collective creation wherein a creative team – it could be just the actors and the director or it could extend to the entire production team – is involved in the process of developing the show. There is no formal script at the start. The piece emerges over time based on discussion, play, and improvisation.

Can you tell us about how you went about developing this show?

Writer-director Kara-Lynn Vaeni: So this is the first time I’ve ever devised anything and I may never go back to working on someone else’s script again!  I had a structure – the 5 levels of the sublime.  And I was trying to get outside traditional ideas of theatre. So perhaps we could think of the form as if it were a... poetry slam? Or maybe it’s like a poetry slam about running – because I like working with very physical things.  On the first day of rehearsal I asked the actors to bring in a poem that they would enter in a poetry slam contest about running, and I asked them to bring in a story about one level of the sublime that they had experienced in their lives.

I would have them tell their stories and then I would give them assignments based on what I heard. For instance, go make a 30-minute dance piece that talks about these four things. Or Make up five jokes, but the punchline has to be one of the things that an actor talked about in their story. Then I’d send them away and they would come back and perform the assignments. We’d all watch together and decide what we like, what to keep.

The other thing I did, again because devising is so new to me, one of the techniques I used was to talk with the actors about the things we love in a performance. We made a list: ‘I like a show with a feeling of magic,’ ‘I like a show with a big production number,’ ‘I like a show that’s funny but then sad, but then funny again.’ So as I was writing the final script, made up of the best of our experiments, I had a map. I could say, ‘Right, guys, now we need a big production number, we don’t have one yet.  Let’s work on that.’

We can’t wait to show you what we’ve made. 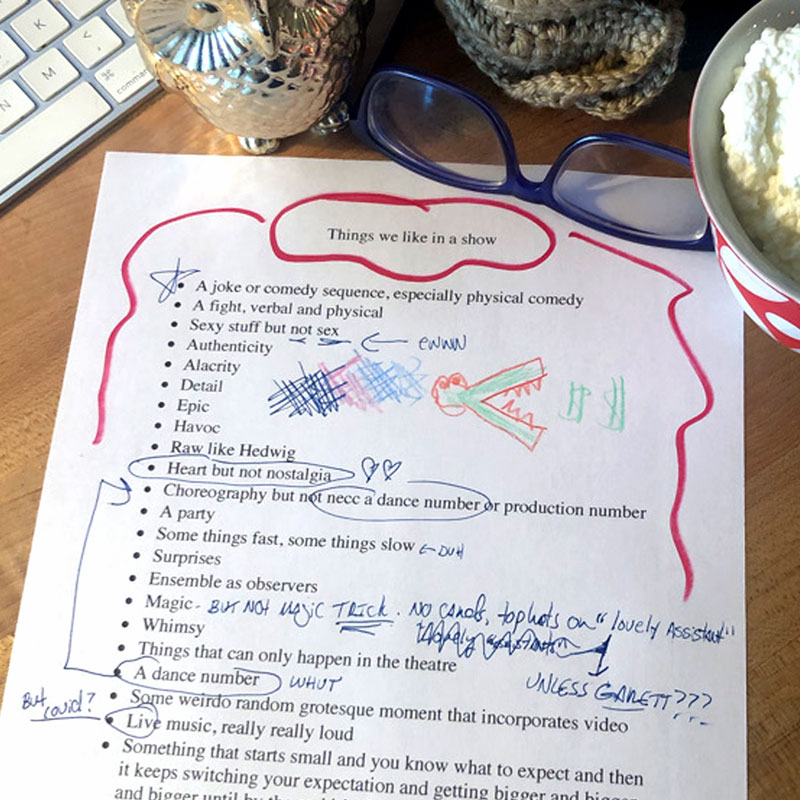