Gloria Benavides on Playing It Up | Stage West Theatre | Fort Worth, Texas
Skip to main content

Gloria Benavides on Playing It Up 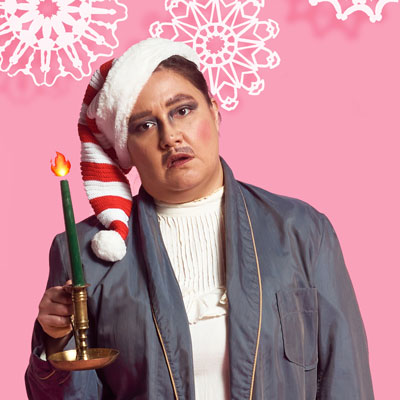 Q: In this show, you play a character named Vesta Verile who is inspired by real-life male impersonator Vesta Tilley. And Vesta (in the play within the play) portrays the role of Ebenezer Scrooge, one of the most iconic characters in the Western canon. Can you talk about the cross-roads of playing both a character inspired by a pioneer of gender performance and also one of the most famous characters in world literature?

A: I am a queer performer. I love breaking the rules, pushing boundaries, and poking fun at the normies. I’ve been playing men since I was 16. Even as a kid, I loved it—it’s always a challenge, and you have access to fun, meaty roles. Although we’re seeing some gradual (see: slow) progress in terms of representation in playwriting and on stage, women often still have to fight for just a few roles in every play, and many of those characters are underdeveloped. Yes, even in 2021. So, we can imagine the circumstances Vesta Tilley came into as a young performer in the 19th century, an era when women were relegated to playing princesses and maids. The fact that she was able to circumnavigate the limitations of the time and make a career on her own terms is some BOSS BITCH SHIT and I am honored to tap into some of that power on stage as Vesta Virile. Because of pioneers like Vesta Tilley and Gladys Bentley (look them up!), I’m suiting up every night to play Ebenezer Scrooge— I am wearing a mustache, creeping around with a candlestick, and having a hell of a time playing the one of the meanest, crustiest, most iconic misers in literature. Oh! And I’m doing it all in this Latina’s body. I’d like to think that would have really pissed off a guy like Scrooge. I’m here for it. I hope you are, too.