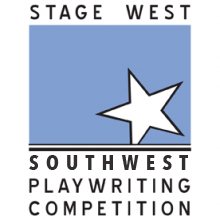 The 11th Annual Southwest Playwriting Competition has been completed.

The winning play chosen through this competition will be workshopped and presented as a staged reading by professional actors in the Dallas-Fort Worth area.  A $500 prize will be awarded to the winning playwright.  A future, full production of the play is also possible.

The winning play from the 11th competition is Dust, by Nicole Oglesby.

Dust will be presented as part of the New Play Readings Festival on Sat, Apr 22.

Nicole Oglesby is an Austin-based playwright who creates poetic and political works about women. Upon graduating from UT Austin in 2016, she founded the Heartland Theatre Collective with co-collaborator, Marian Kansas, in order to produce her play, Dust. Dust received critical acclaim and was nominated for the Austin Critic’s Table’s David Mark Cohen New Play Award. In June, the Heartland Theatre Collective will premiere her newest play, Little Bird. Also a performer, Nicole has acted professionally in the Austin area and performed at four different improv theaters. Nicole was born in Ft. Worth, Texas and is a Haltom High School alumni. More info can be found at www.nicoleoglesby.com.

Honorable mentions go to The Further Adventures of Sean and Sophie Morass by Ben Kemper and Bachelor Hall by Gene Franklin Smith.

The Further Adventures of Sean and Sophie Morass by Ben Kemper

Ben Kemper hails from Boise, Idaho. A graduate of Northwestern University he studied playwriting under Laura Schellhardt, David Caitlin, and Paul Edwards. His first professional production, Back When Mike Was Kate will premier at Playhouse on the Square in Memphis. Other productions include Our Lady of Paulina Street at the Chicago Tickbooth Festival; Bloodless with AlphaNYC in New York, NY; The Remnant of Content at The Alvina Krouse Studio in Evanston, IL, and The Winnowers part of the Northwestern Playwriting Sequence. He is proud to have served as producer/dramaturg for Sampo: A Retelling of the Kalavalah by Greer Dubois, Theater in the Dark by Andre Sgerra, The Way This City Bleeds by Samantha Mueller, Wet by Aurora Real De Asua, and The Armor Plays by Selina Fillinger.

Gene Franklin Smith studied with renowned playwright, poet and Russian translator, F.D. Reeve at Wesleyan University where Gene’s first play, an adaptation of F. Scott Fitzgerald’s Tender is the Night was produced. Other produced works in New York, Los Angeles and Toronto include Adults in Love, Life Beneath the Roses (winner James Ellis Memorial Award), Created Equal, Rubicon, Go Thy Way With Joy, Charles Dickens’ Bleak House, Transports of the Heart, Haunted Masters, More Haunted Masters, Boise USA (featured on NPR’s “All Things Concerned”) and Flim Flam: Houdini and the Hereafter.  In 2013-14, Gene was Artistic Director of Malibu Playhouse, where he directed his updated adaptation of Noel Coward’s The Vortex, which was remounted at the Matrix Theatre in Hollywood and nominated for best stage production, best actor and best actress of 2014 in Los Angeles.  In 2016, Gene won Best Director and Best Production Awards for The Game’s Afoot or Holmes for the Holidays at Theatre Palisades.  He is a member of the Alliance of Los Angeles Playwrights and a magician member of the Academy of Magical Arts at the Magic Castle in Hollywood. www.genefranklinsmith.com.

We have not yet begun accepting submissions for the 12th competition--please check back for updates.