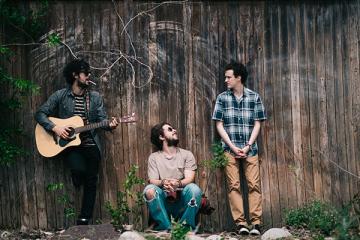 The first thing audiences should know about The Aliens is some background on its playwright, Pulitzer Prize winner Annie Baker. She has an incredible gift for realism and dialogue. She captures life beautifully. One of the devices she uses to do that is silence. Her Playwright's Notes for The Aliens (an Obie Award winning play) state "half of this play should be in silence." Without that silence, the play would be a little under an hour. Ours runs just under two, with intermission included.

Those silences are not empty. They are filled with life: tension, happiness, longing, need, curiosity... The silences define the rhythm of life as it's lived. For our characters, the set is their playground... a place of ultimate refuge and safety where they can vent, create, experiment and just be.  In this play, we the audience are voyeurs watching events unfold over a couple of weeks one summer behind a coffee shop in Vermont.

So, what is the play about? It's about life. Growing up. Connection, friendship, love, loss, hope. Drugs, rock-in-roll, Bukowski, poetry, disillusionment and fireworks. It is about a teenager who finds himself through the most unlikely of mentors. It is simple and full. It is life. I am so honored to bring this beautiful play to the stage and to share it with audiences.

One more thing: During casting, I really struggled. Both of my older actors were fully capable of playing either role. They couldn't have had more different takes on the characters but both performances were honest and sublime. About midway through rehearsal, I confessed the casting dilemma I'd had to Jake (Buchanan) and Joey (Folsom), the actors in the roles . Together we decided to let them do one rehearsal in the opposite role. I was sold and they were excited, agreeing to the added work with the pay-off of getting a very rare opportunity for an actor. It's worked out great. Seeing the different performances is a trip. Completely different but fabulous. Audiences will see the original casting on Thursdays and Saturdays and the alternate casting on Fridays and Sundays.