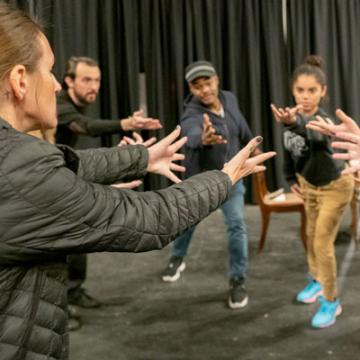 Stage West education courses are a fun and creativity-enhancing way to learn the arts of theater, improvisation, and public speaking! We infuse all of our classes with acting techniques from a variety of sources. Come get hooked on drama!

Acting for Adults, Foundation 2, Part 2: How to Apply Technique

In this class, Douglas Davidson focuses on ‘practical acting’. Students will learn how to apply a variety of techniques-- from Michael Chekhov, Sanford Meisner and Earle Gister (Yale School of Drama) -- in rehearsal and performance.

To Be Announced! We have several exciting contenders for this class slot!! The winning course will be announced in February!

A four week exploration into all elements that create better speaking!

Week 1: Accent Reduction, Taught by Maggie Crawford
In this class, we focus on fine-tuning our ear and learning correct vowel sounds and placements.

Week 2: Secrets to Better Diction, Taught by Joanne Zipay
Give your articulation muscles a workout, with fun, energizing exercises designed to stretch, make clearer sounds and improve your diction.

Week 3: How to Be a Better Speaker, Taught by Beth Bando Bontley
Learn a variety of techniques to lessen nervousness, connect with your audience and enhance your public speaking abilities— from wedding toasts to professional presentations.

Week 4: How to Craft a Speech, Taught by Kim Titus
Learn how to prepare a presentation from an engaging introduction to a powerful conclusion; develop techniques to remain calm and confident; and discover how to practice your speech for maximum effectiveness.

Beyond Borders: An Introduction to International Theatre-Making; An Exploration into Post-Dramatic Theatre.

Participants will take part in exercises geared towards post-dramatic theatre: a type of theatre that operates outside of the lines of Aristotelian, plot-driven, drama-based work.
It uses spectacle (movement, voice, design, puppets, ritual, pageantry) to:
We will explore versatile tools to create large poetic gestures and unlock a more forceful theatricality.
Julie Paucker and Brian Bell met at the German National Theater in Weimar and have been working closely together since. With their combined experience making theatre in Germany, Switzerland, France and America, Julie and Brian will introduce students to new methods of theatre-making and new theatre forms being created in German-speaking Europe.  Julie Paucker will introduce her work as the artistic director of the KULA Compagnie and Brian Bell will discuss the challenges/rewards of being an American stage director in Germany.
Taught by Julie Paucker and Brian Bell
Ages 18+
[[ REGISTER NOW ]]

All Courses have an additional $15 Registration Fee.
There is a $25 drop fee, plus fee for classes attended, in the first two weeks. After that time, no refunds are allowed.

Beth Bando Bontley, Education Director
Beth has honed her skills over the decades in all areas of theater. She has acted extensively in NYC and in Boston, where she established her first acting studio. Locally she has performed with Echo, Theater 3, Circle, Runway and Artisan Theaters.  She has taught at TCU, TCC, STAGE, Dallas Summer Musicals, Dallas Children’s Theater and Kids Who Care.

Beth earned her BA in Speech and Drama at Trinity University; completed the two year conservatory at Circle in the Square in NYC; and earned her MFA in Interdisciplinary Arts from Goddard College.

Her original one woman show, ‘Acet-o-philous or Vinegar Love’ has been performed at Arts 5th Ave, the United Solo Festival in NYC and the Ft. Worth Fringe. She is also an author and a speaker, devoted to personal and artistic growth.

Allison Connor
Allison has been performing and teaching Improv for over 20 years.  She has performed and trained with The Groundlings in L.A., The Second City in Chicago and Gotham City Improv in NYC.  She has taught Improv at The Comedy Store in L.A. and led numerous improvisational workshops for corporations, schools and universities.  She has appeared in many national television commercials and on HBO's improvised hit comedy "Curb Your Enthusiasm."

She is delighted to be working at Stage West!

Joanne Zipay
Joanne Zipay founded NYC’s Judith Shakespeare Company in 1995 and served as its Artistic Director for 20 years.  She has taught, directed, dramaturged, and performed in the professional theatre coast-to-coast for over 40 years.  Joanne studied Shakespeare at the Old Globe Theatre/University of San Diego MFA program, and has also studied with John Barton of the RSC.  She has taught students of all ages at institutions including Pace University, City College of NY, Stella Adler Conservatory, Children’s Shakespeare Theatre, Brooklyn Academy of Music, National Shakespeare Conservatory, and Collin College.  This season, she will direct Stage West’s production of Into the Breeches!